Yongan District of Kaohsiung City is one of the most important villages for grouper fishery in Taiwan. In 2016, an overwhelming cold snap almost destroyed the 3 years of hard work of the local fishermen. At that time, many second-generation fishermen who had been working outside of the village returned to rebuild the village, and then around 10 stayed behind. The crisis in the fishing village created another wave of industry revival in the community.

In Taiwan, there is a road called "Grouper Road" which is 3.5 kilometers long and close to the coastline. As the name implies, the place is the main village of grouper fishery in Taiwan. The narrow hinterland along both sides of the road is Xingang Village which was known as the " Sea Line" in Yongan District, Kaohsiung City. The place is called the "Home of Grouper" because in 1976, Mr. Chiu Nan-tso, a Xingang villager, first introduced 6,000 groupers from Penghu and successfully raised them on a trial basis, which started the grouper farming industry on the southwest coast of Taiwan.
The overwhelming cold snap in early February 2016 affected 80% of Yongan's grouper farm, which reduced the results of 3 years of grouper farming to zero and caused over $1 billion in losses. Su Kuo-chen (Known as Chief Su), the Chief of the 8th grouper production and marketing class, was one of the affected households. At that time, many second-generation fishermen who had been working outside of the village returned to rebuild the grouper farms. But after settling down, most of them back to their paths and only about 10 stayed behind. Su Yu-hsuan, daughter of Chief Su Kuo-chen, and her husband Chen Kun-cheng are two of them.
In fact, with the change of political party in Taiwan's general election in early 2016, grouper orders from Chine were cut by 70%. The fishermen in Xingang Village had to reorganize production and look out for new sales channels. Mr. Chen Kun-cheng said, "It was like being pushed from 10 floors to the ground and then got shot twice". However, without the crisis, Xingang Community Development Association would not have the good results today.
At that time the couple was under 40 years old, Mrs. Su Yu-hsuan was working in Macau and Mr. Chen Kun-cheng was working in TSMC. They handled not only the debts and revived the grouper farms for Chief Su, but also resigned from their jobs and backed the Community for the industry revival with Chief Su and the other second-generation fishermen.

Using "Diamond Water" to Improve the Fish Catch Quality
The first step was to solve the "reliant on the natural" problem. The local fishermen found that the cooling water from CPC Corporation's liquefied natural gas (LNG) plant in Yongan District is clean, with no problems of Eutrophication and process pollution. The water temperature is always 17-22 degrees, which is the best temperature for grouper farming. After a trial raise by Chief Su, he found that the survival rate of the groupers increased by about 15% and the meat quality was improved. Since then, CPC Corporation has been providing free cooling water to fishermen in Yongan District and they no longer worry about the threat of cold snap damage, named the water "Diamond Water".
In the past, 90% of the fish caught in Xingang area was bought by wholesalers, but the profit of the fishermen was less than 10%, and they had to bear the risk of natural disasters. The Deputy Executive Director, Mr. Chen Kun-cheng was determined to help the fishermen break away from the weighing and scaling sale method and advocated branding through Community power. So, they took the first step by launching the "SU's GIANT GROUPER" brand and started buying refrigerators, joining markets, fairs, and doing e-commerce.
Soon, Mr. Chen noticed that the division of the Association should be separate from production and sales since sales were not the main business of the Association. Furthermore, the fishermen need to raise and sell fish, taking care of the cash flow, logistics, and marketing, which were far beyond their capacity. Therefore, Mr. Chen established Xingang Community Cooperative under the Association in early 2020. As the CEO of the Cooperative, Mr. Chen is committed to promoting community-farmed grouper, and directly delivers the freezing, vacuum-packing, and passed strictly inspected fishery products to a family's table named the Association's brand "Fresh Quality".
At the same time, Xingang Community Cooperative has applied for the Multi-Employment Promotion Program (MEPP) by the Ministry of Labor (MOL). In 2021, the Cooperative continuing applied the Empowering Employment Program (EEP) which could support 12 staffing positions to serve more than 600 members and attract young workers to host promoting activities.

The Cooperative Contributes to Marketing and Entries to High-end Channel
In the name of the Cooperative, the Association can free the hands to largely expand the physical markets and online channels of the grouper. In terms of the online channels, the Cooperative has entered MOMO, books.com.tw, NATURAL (organicshops.cc), and other online channels. Fortunately, with the advanced online channels deployment in the past few years, the Cooperative was able to grow up its sales numbers like other e-commerce channels during the COVID-19 epidemic in 2020.
In terms of physical channels, after many tries, the Cooperative has confirmed to enter a high-end channel and targeted to set up a shop in Tainan Shin Kong Mitsukoshi Department Store. Now it also sets up a shop at Dream Mall and a temporary sale counter in Hanshin Department Store in Kaohsiung. In addition, the Cooperative also worked hard to sell the products to the Southern Taiwan Science Bureau, the Welfare Committees of Technology Manufacturers, Restaurants and Hotels, Major Stores, strategic alliance marketing with Yuan-Yu Farm, and even joins the Double 11 Festival and Engineers' Day. During the epidemic, the Cooperative even took the meal orders of the Epidemic Prevention Quarantine Hotels which were referred by its restaurant customers, which shows how hard-working this young army was!
In addition to promoting the groupers, the Association also brings in the non-toxic organic agricultural and fishery products from the smallholders and fishermen in the neighboring village such as Mituo District and markets them under the brand "Young Fishermen" to enrich the product line and create mutual benefits. Now, through both the online and physical sales channels, the Cooperative's monthly revenue conservatively reaches more than NT$800,000, and 25% of profits of the Cooperative are returned to the Association for the traditional welfare and care works of the Community every year.
Xingang fishery product has been selected as one of the "Rural Good Products" for four consecutive years now and is the only one selected in the aquatic product category. Xingang Community received the Golden Village Award of Kaohsiung Area in 2018 and won the Gold Medal Award in National Golden Village Competition in 2020, proving their hard-working results. Chief Su received the 2019 Rural Village Leadership Award and his daughter, Mrs. Su Yu-hsuan, received the "Top 100 Young Farmers" honor.

The Income of Cooperative Fishermen Is About to Increase More than 20%
Through the successful marketing strategy, the Fishermen naturally have benefited from it. After new sales markets had been expanded, compared to the period that the fish catches were acquired by the wholesalers, Mr. Chen left at least 30% of the profit margin to the Cooperative's fishermen. He estimated the income of the fishermen has increased by more than 20% in the past one to two years. He mentioned that the wholesalers offered a three-month payment cheque to the fishermen, but Xingang Community Cooperative paid in cash, so the fishermen were happier to cooperate with the Cooperative.
With the young manpower, the Association organized the first "Fisherman's Life Festival" event on Double Ten Festival Holiday in 2021. The festival invited 54 vendors for free and hosted a "Local Food Table" activity. The two days event attracted 3,000 visitors and the vendors were about to generate revenues of over $1 million. The Association mobilized 50 people to organize the event didn't for profit but to promote Xingang's fishery products and build up the trust and connection of the Community and which will be beneficial to the joint marketing in the future, Mr. Chen emphasized.

One With Another, about 30 Youths Returned to the Village
The Community is on the glory track with the youth army and attracting more young people to come back to the village. Mr. Chen estimates there are about 30 young people back to work in the Community now.
For example, Mr. Chen Chin-chi, a cooperative fisherman, is a native of Cieding District. His family has been raising milkfish and mullet roes for more than 30 years. He did not want to go back to his hometown for the family business and was a beverage store manager in Taipei. Mr. Chen Kun-cheng convinced him to develop the grouper fish balls. After Mr. Chen Chin-chi earned a stabilized income, he quit the job in Taipei and settled back in Kaohsiung with his family in 2021.
"You have to think of yourself as a madman and don't count the ROI in your Community but reline on your passion and ideas to take care of the farmers for the Government". Although there had not been released of the Covid-19 epidemic, the Association has reached their yearly goal in the end of October. "The path of rebuilding the Village is also our way back to the hometown. We truly appreciate the Empowering Employment Program (EEP) by the Ministry of Labor, which enables us to try in the possible filed and made us go to the places we did not imagine before!" said Mr. Chen Kun-cheng.
Xingang Community Association Facebook Page: Kaohsiung Yongan Xingang Community Development Association 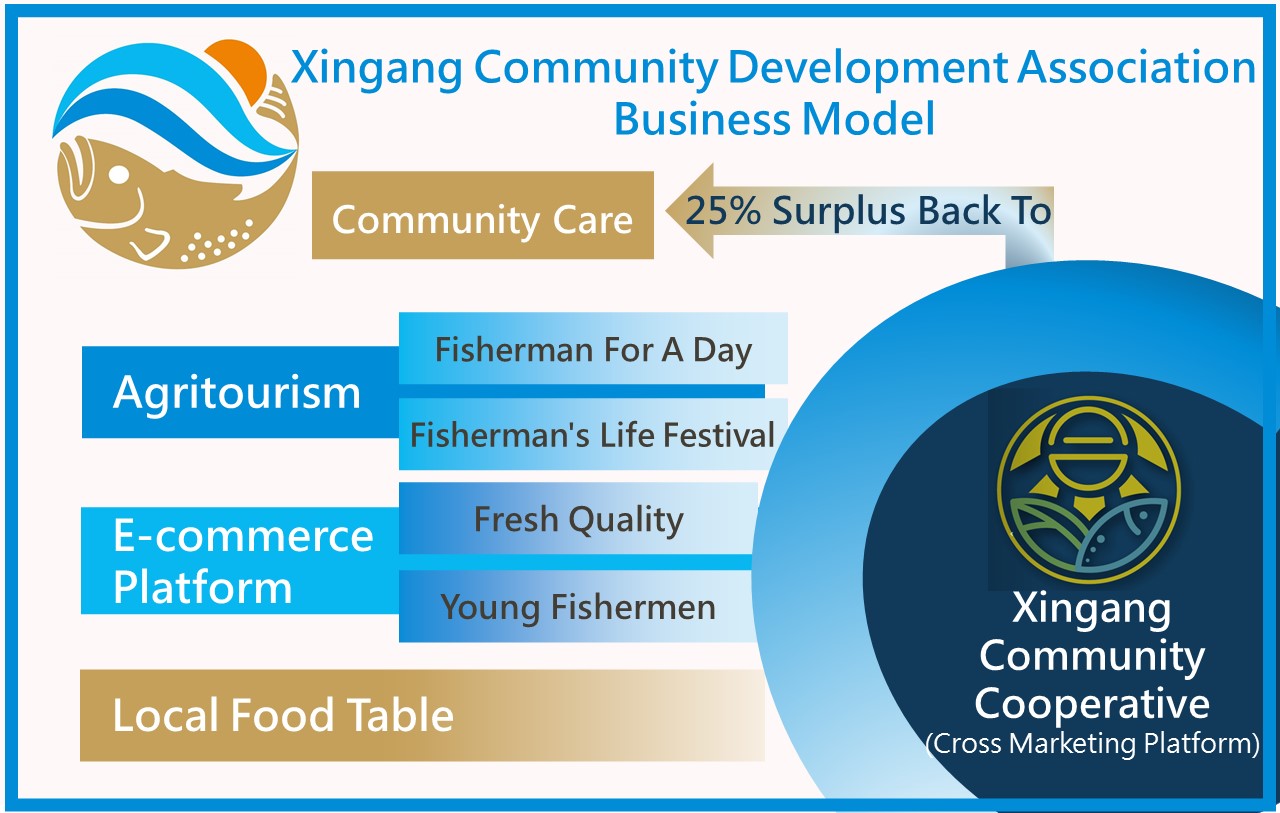 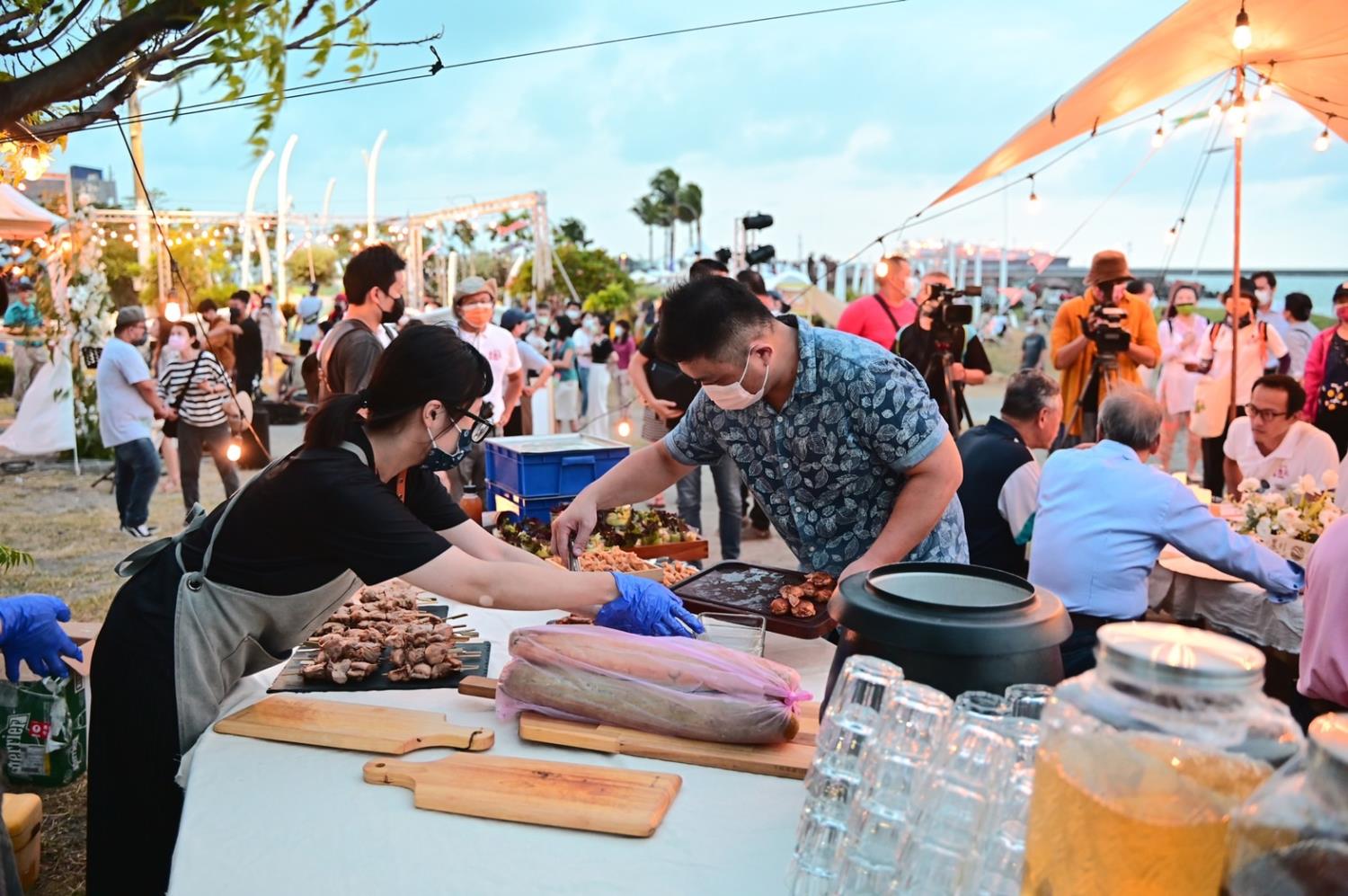 ▲The Association organized the first "Fisherman's Life Festival" at Diamond Beach and attracted 3000 visitors in only two days in 2021. 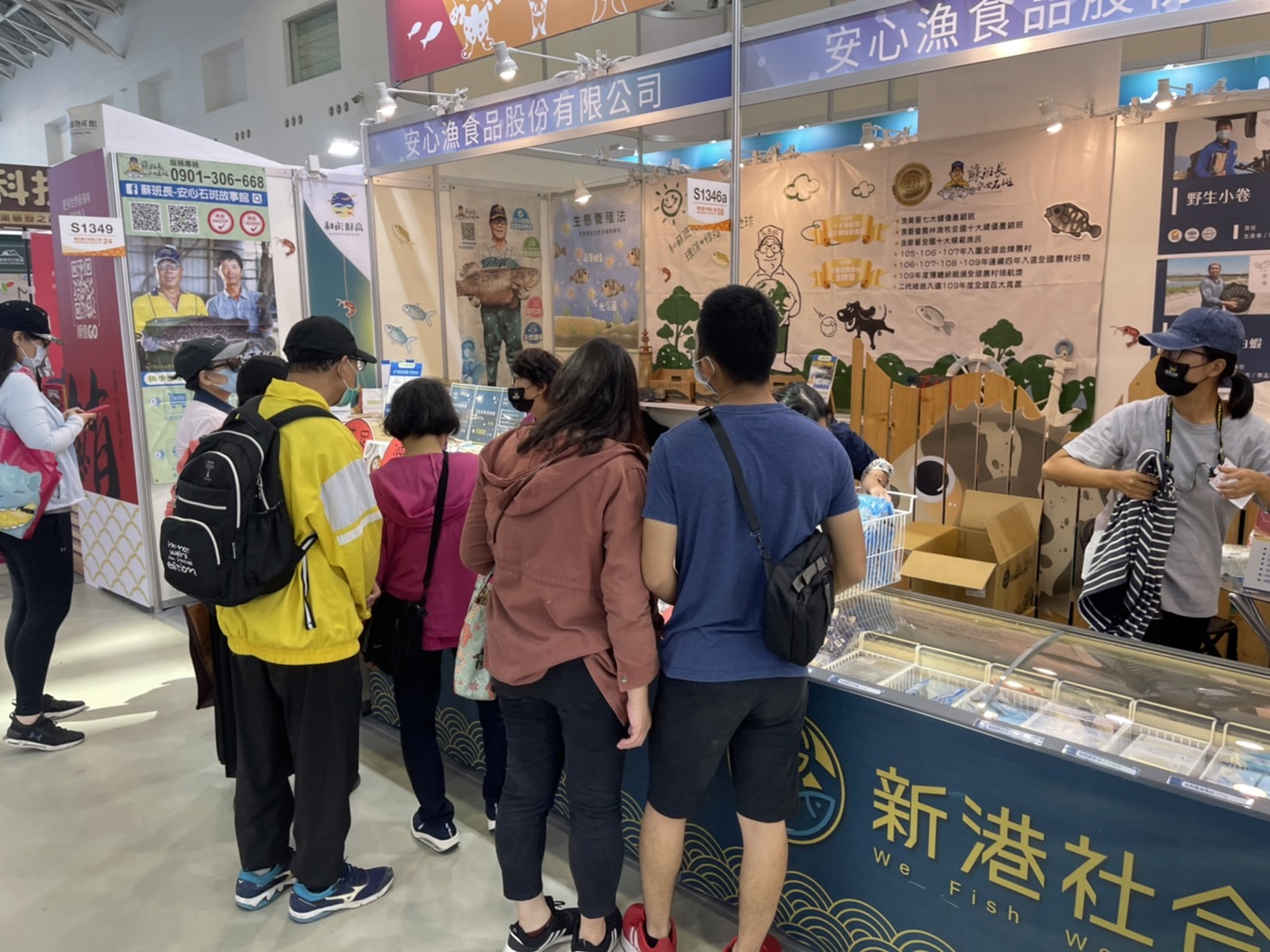 ▲Xingang Community Cooperative actively participated in exhibitions and sales events across the country to sell the fishermen's products. 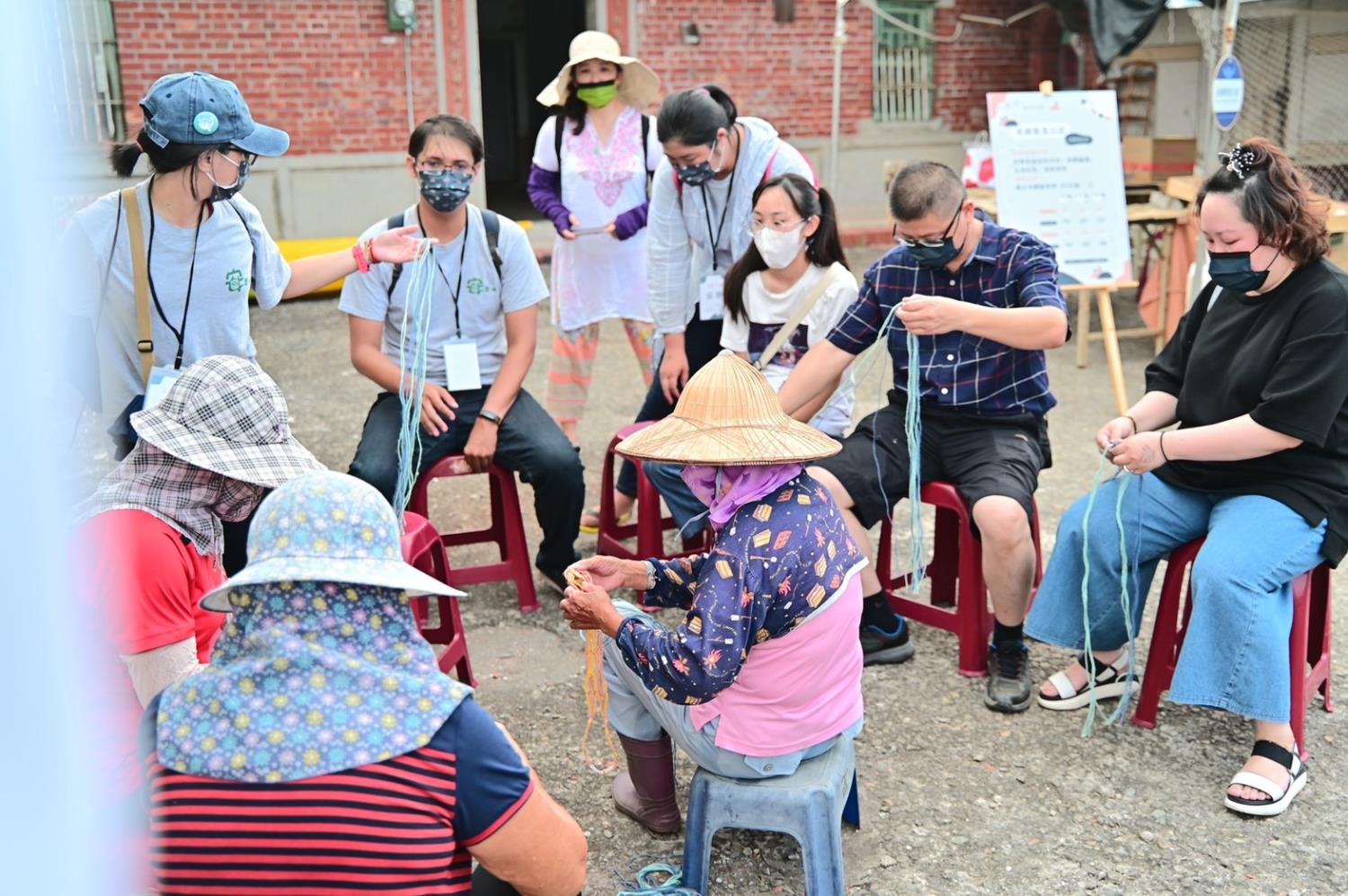