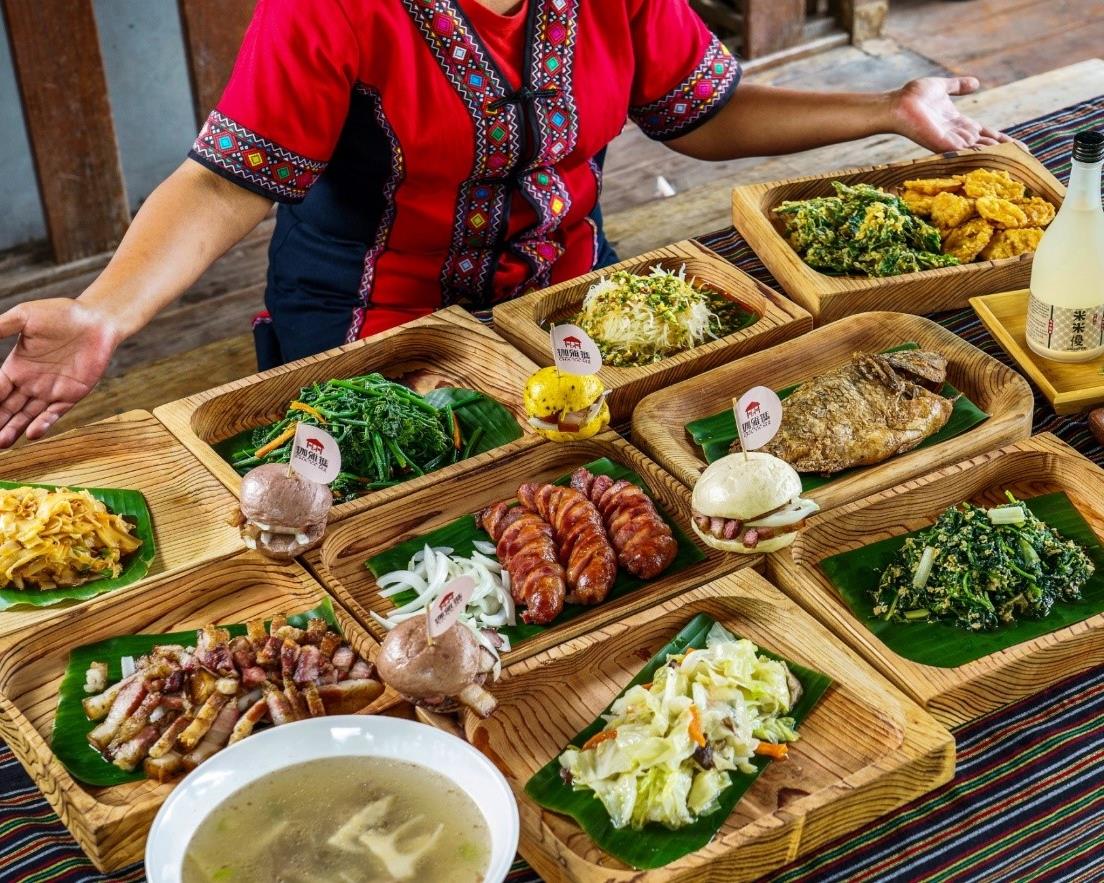 From the 921 Earthquake, Typhoon Morakot to the COVID-19 epidemic. Almost suffering massive disasters every decade, Chashan Tribe Industrial Community Cooperative (Past: Chashan Community Development Association) didn't be destroyed but transformed again and again to find new opportunities. The Tribe relied on the Tourist Industry of its natural environment and then developed into an Agri-industry upgraded in grains production and marketing. Last year (2021), the Tribe improved to a Cooperative organized by smallholders, proving that "Life finds a way."

Went through the wriggle industrial road to Chashan Tribe located more than 400 meters above the sea level of Alishan Township, Chiayi County, you can see in mind is the Thatched Pavilion (Hufu) at the entrance. The Tribe is located on the border of Chiayi and Kaohsiung, which is home to three ethnic groups, Tsou (60%), Bunun (30%), and Han (10%). The word "Cayamavana" in Tsou Language means "A Tribe of three ethnic groups."

No matter which ethnic group a household belongs to, there are all kinds of pavilions in front of each household, creating a unique landscape. To avoid disturbing the spirits of the Tsou ancestors who were resting in peace, the family could not speak loudly inside the house, so they built pavilions outside for gathering and chatting. Since 2000, Chashan Tribe has been organizing an annual "Hufu (Pavilion) Festival " by those unique pavilions, which attracts many tourists every November.

Located in the southernmost part of Alishan Township, Chashan Tribe has unique natural resources. It has large rocks to climb, streams and small waterfalls to play with, fireflies to watch, stars to watch, and a distant view of the beautiful mountains and forests. However, those beautiful sceneries could suddenly be disappeared by natural disasters. In the past 20 years, the Tribe's residents have suffered the pain deeply of their home being destroyed twice.

Tian Jia-ling, the secretary of Chiayi County Chashan Tribe Industrial Community Cooperative (hereinafter as "the Association" as it was known as Chashan Community Development Association and converted into a Cooperative in 2021), is the core person of the special tribal event "Hufu Festival". She is also one of the first young group who returned to their hometown after Typhoon Morakot in 2009. Ms. Tian recalled the disrupted transportation to the way outside of the Township and the devastating homeland she faced in the first year she returned to the Tribe.

"After the Typhoon, the tap water and electricity had been cut for almost half a year and no people came to the Tribe for a whole year. It was not the first massive disaster Chashan Tribe ever met. The Tribe also encountered the 921 Earthquake in 1999 and the COVID-19 epidemic in 2019. It is almost tested by a massive disaster every decade but we always find a new way out.", Ms. Tian said optimistically.

Add Values to the Crops and Cashes Out the Local Culture

"After our Tribe was devastated by Typhoon Morakot seriously, we just realized that we must have our own industry to avoid the natural disasters breaking the living again. We didn't rely too much on the tourist industry and established Alishan Chashan Grains Production and Marketing Group." Ms. Tian said by recalling the transformation of the Association. Since the establishment of the Production and Marketing Group in 2010, we have been working on organic agriculture and have upgraded bamboo shoots, millet, and ginger into secondary products such as millet wine, ginger sugar, and camellia seed oil for marketing overseas. In 2017, we were even selected as one of the "National Top 10 Agricultural Production and Marketing Groups" by the Council of Agriculture (COA).

Since the industry upgrading, one kilogram of the Tribe's raw bamboo shoots no longer earns only NT$8 but is made into cooking packs to double the unit price and make a profit of NT$100. The success of the first transformation encouraged the Tribe people. Fang Xin-hua, a lady aged 68, who lived in the Tribe for more than 60 years feels it deeply. She is good at preparing traditional meals with her good cooking skills. After the vocational training, her cuisine amazed the tourists who participated in the cultural food experience, and a table of the cuisine can be worth NT$5,000 to 6,000. This has not only increased her income and improved her finance, but also made her more confident in the development of her cuisine. Recently, through the Professional Counseling of a Professor from the Development of Food Science at Chiayi University, Ms. Fang has improved the hygiene quality and expanded the sales of her creative Meal Packs to the B&B of the community.

The Council of Indigenous People also supported the industry upgrading of the Tribe such as the Professional Agriculture Equipment, Exquisite Counseling, Sales Channel Matching for the local industry, and Industrial Cultivation Program for the young people (Employment provision and Start-up Assistance).

Empowering Employment Program (EEP) of the Ministry of Labor also employed many young people of the Tribe working in their hometowns. Mr. An Chia-hua aged 33, returned to Chashan Township in 2017. He contributes his sense of humor as a tour guide of the tourist tours and farming experience. In the past 3 years, he has built up his professional knowledge through the Association's training course and also took care of his parents. Although he is currently working at Alishan Township Office, he still supports the affairs of the Community during his holidays.

Ms. Chen Xiao-ling used to work at a gas station in Dapu Township, Chiayi County is one of the young people who benefited from the Program too. She is 28 years old and overcame the fear of crowds and then gradually used to tour guiding strangers. Through the Tribe's Tour Guidance, she can better understand the affairs of her hometown which is also an important cultural legacy. In addition, participating in the packaging design of the Association's products also developed her drawing talent.

"The Program is People-oriented, allowing the Tribe people become the owner of the Tribe Industry, no longer as laborers or temporary workers but real producers." Ms. Tian analyzed that the change produced by the Empowering Employment Program (EEP) on the tribal labor force in the past decade will also upgrade the Tribe's production services and value the production economy in the future. Continuous training will broaden the path for the Tribe people to start their own professional businesses.

She examples that through the assistance of the Program, many young people of the Tribe who contribute their special skills as the necessary producers of the Tribe. For example, the traditional cuisine service, culture or Agri-tour guidance, and even the music and dancing performance. There have about 30+ young people (under age 40) willing to live in the Tribe; There are even 14 young people who started their own businesses as docents, caterers, hostel, or experiential farmers after participating in the EEP.

After improving the labor force, in order to speed up the self-operation of the Community, the Cooperative upgraded its soft and hard power. It uses primary crops combine with secondary agricultural processing and then sales as tertiary products to create higher value-added service products towards Six-grade Agricultural Industrialization. From 2020, under the leadership of current Chairman, Mr. Fang Zheng-hua, the Cooperative has launched the industrial organization platform, allowing the Tribe people to be the members and achieve the goal of "Joint Farming, Joint sharing, and Join operation of the Tribe Business."

Goal: Everyone Has a Skill, Every Household Has a Small Business

Different from the Community Development Association used 10+ core management to operate in the past, the Cooperative now has 50 members as stockholders, Ms. Tian said. The members farm and sell together which not only contributes more workforce but also broadens the product sales, to stabilize its supply, quality, sales channels, and price. Under the common good way, all members treat the Tribe Industry as their own business and are more enthusiastic. Although the operation of the cooperative is not as good as expected due to the COVID-19 epidemic, the Tribe people are trying to get rid of the fate of "Reliant on the natural " and work hard together in a mutually beneficial way to take back the leadership of the Tribe Industry.

The main operation of the Cooperative is to integrate and promote the Tribe Industries, including Tribe Stores, Tribe Kitchens, and Tribe Tours. The Tribe store manages smallholders' products in a refined manner and promotes the steady production of Tribe handicrafts. And then, those products will be stationed in the Tribe stores or the online stores by marketing specialists who set marketing strategies such as live streaming, exhibition, or online promotion according to the market changes. The Tribe Kitchen designs the tribal cuisine with local ingredients as an Agri-meal experience and provides to the tour groups which the Tribe cooperates with the tourism companies inside and outside of the Tribe. The Tribe Tour Planning integrated and innovated the stable trips (half-day, one-day, or two-days) which were hosted in the past, made them more sophisticated and match the market demand, and then participate in the exhibitions for marketing and promotion.

"It is the most energetic year of the tribal production after the COVID-19 epidemic and mobilized the whole Tribe people" Ms. Tian is excited to say so. After increasing the workforce, the Tribe people gradually became independent. The operation model of the Cooperative is getting stable and considering transforming into a Social Enterprise. It will further combine nine types of professionals, including Eco-teachers, Tribe Kitchen Chefs, Four Season Farmers, Tour Guides, Hunters, Lifeguards, Craftsmen, Food Farmers, Environmental Educators, and Host Family owners, making the participating Tribe people " Everyone has a skill and every household has a small business" to arise their income and life. Ms. Tian will also expand the community tourism from an annual Hufu Festival to a tourism industry ecosystem with business opportunities for all seasons.

The Tribe's greatest asset is its people. Anything can be taken away, but not the management of the people. We strive to joint farming and sharing to make our people the owners of the Tribe Industry, and move forward to be a sustainable Tribe Enterprise.
~ Mr. Fang Zheng-hua, Chairman of Chashan Tribe Industrial Community Cooperative 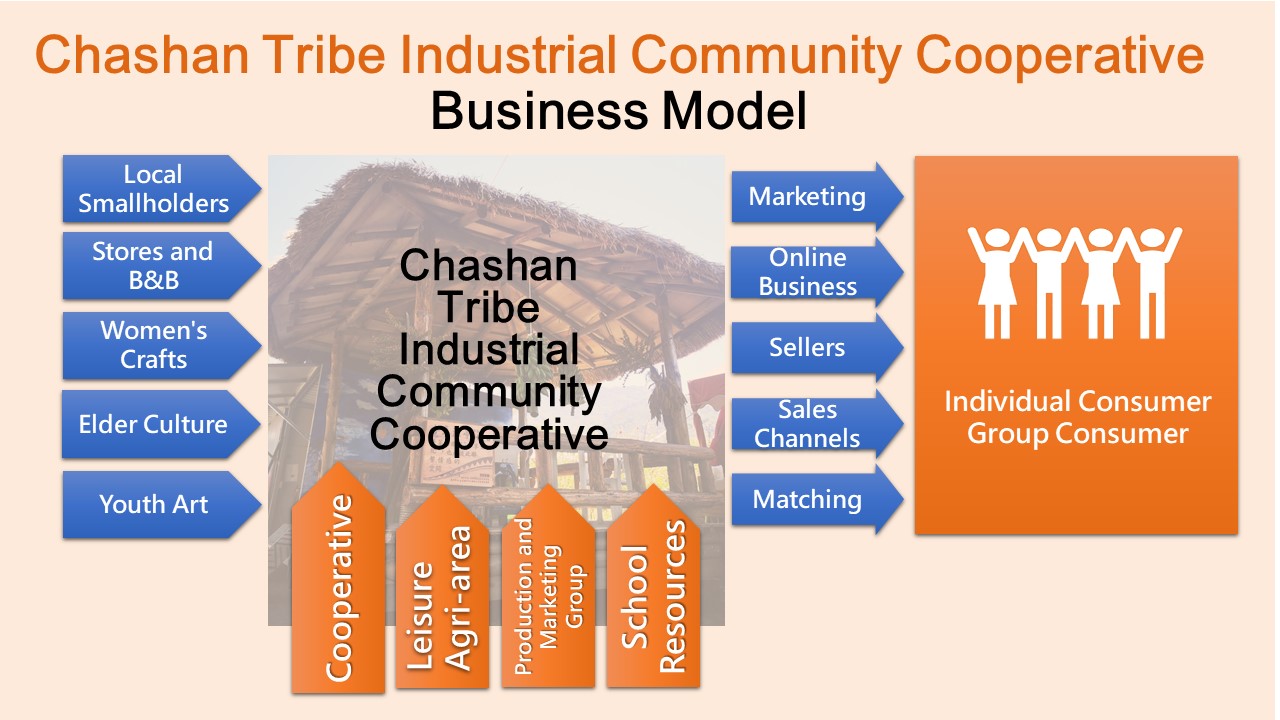 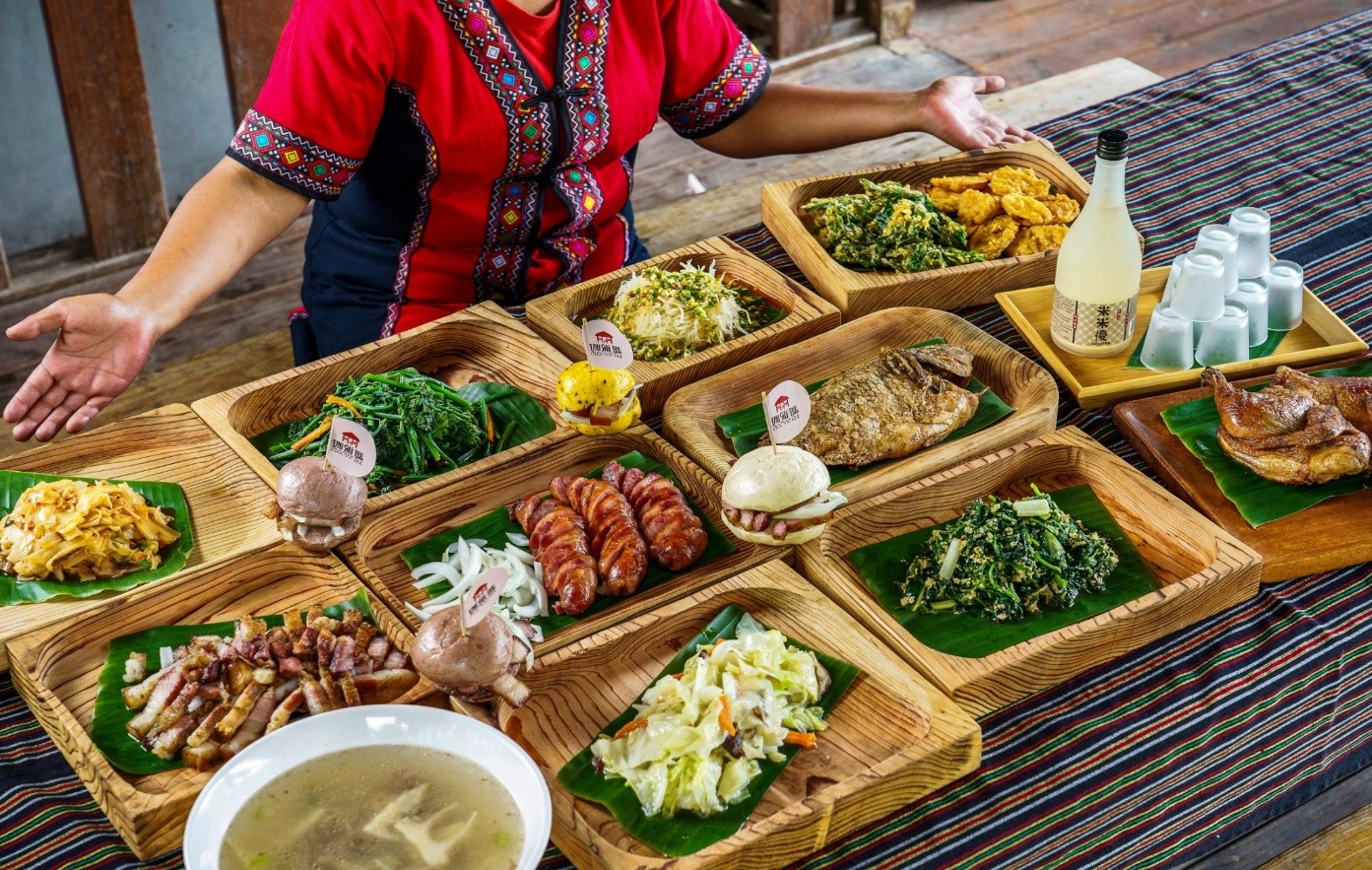 ▲Through vocational training, Chashan Tribe Industrial Community Cooperative has transformed the traditional meals into special tribe cuisine that amazes tourists who participate in the cultural dining experiences, and a table of cuisine can be worth NT$5,000 to 6,000. 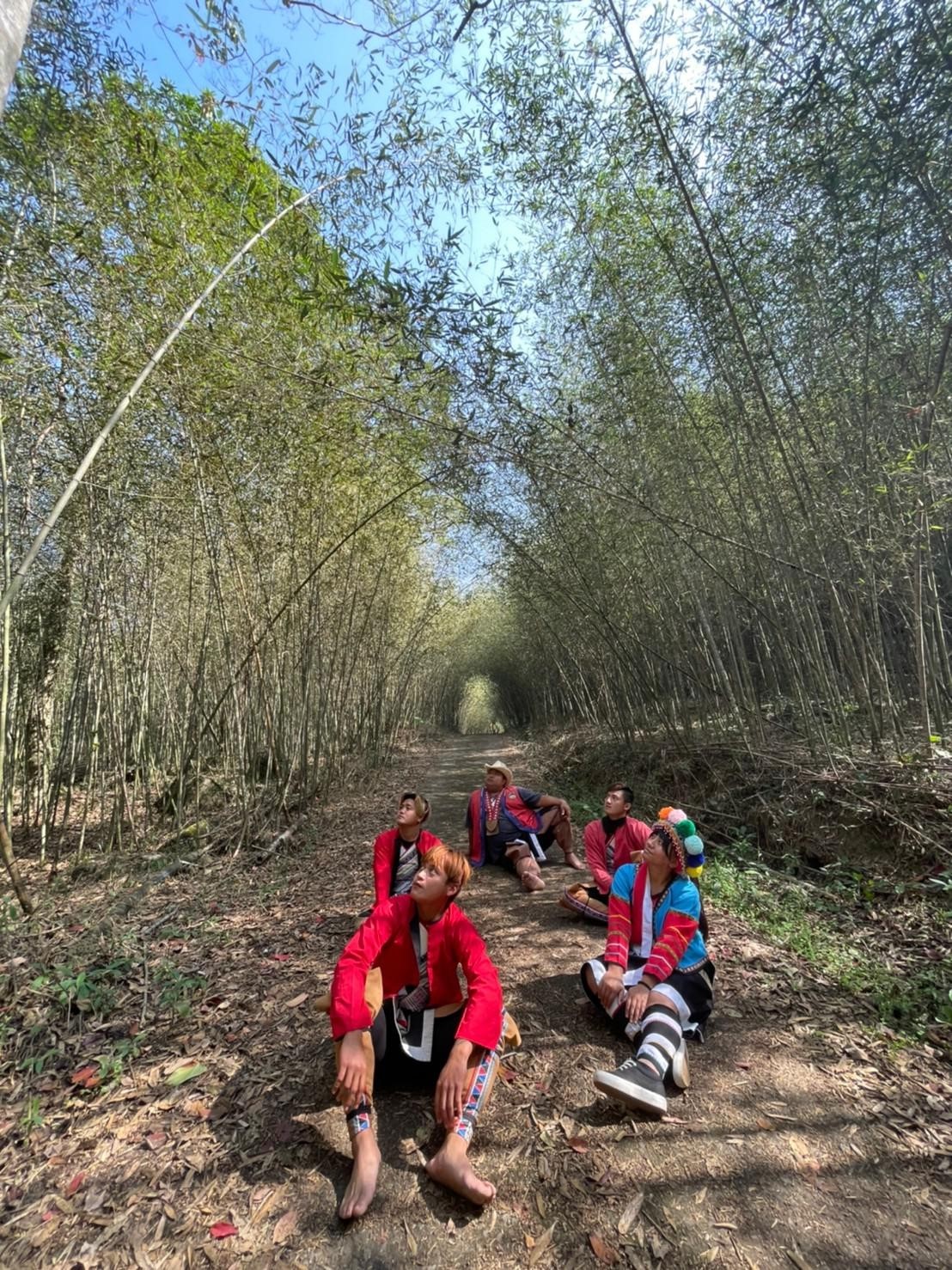 ▲The bamboo forest of the Monkey Cliff of Chashan Tribe is a fascinating sight. There are also streams and small waterfalls to play in, fireflies to watch, stargazing, and a distant view of the beauty of the mountains and forests. These unique natural resources are the most precious assets of the Tribe. (Picture provide: Chashan Tribe)