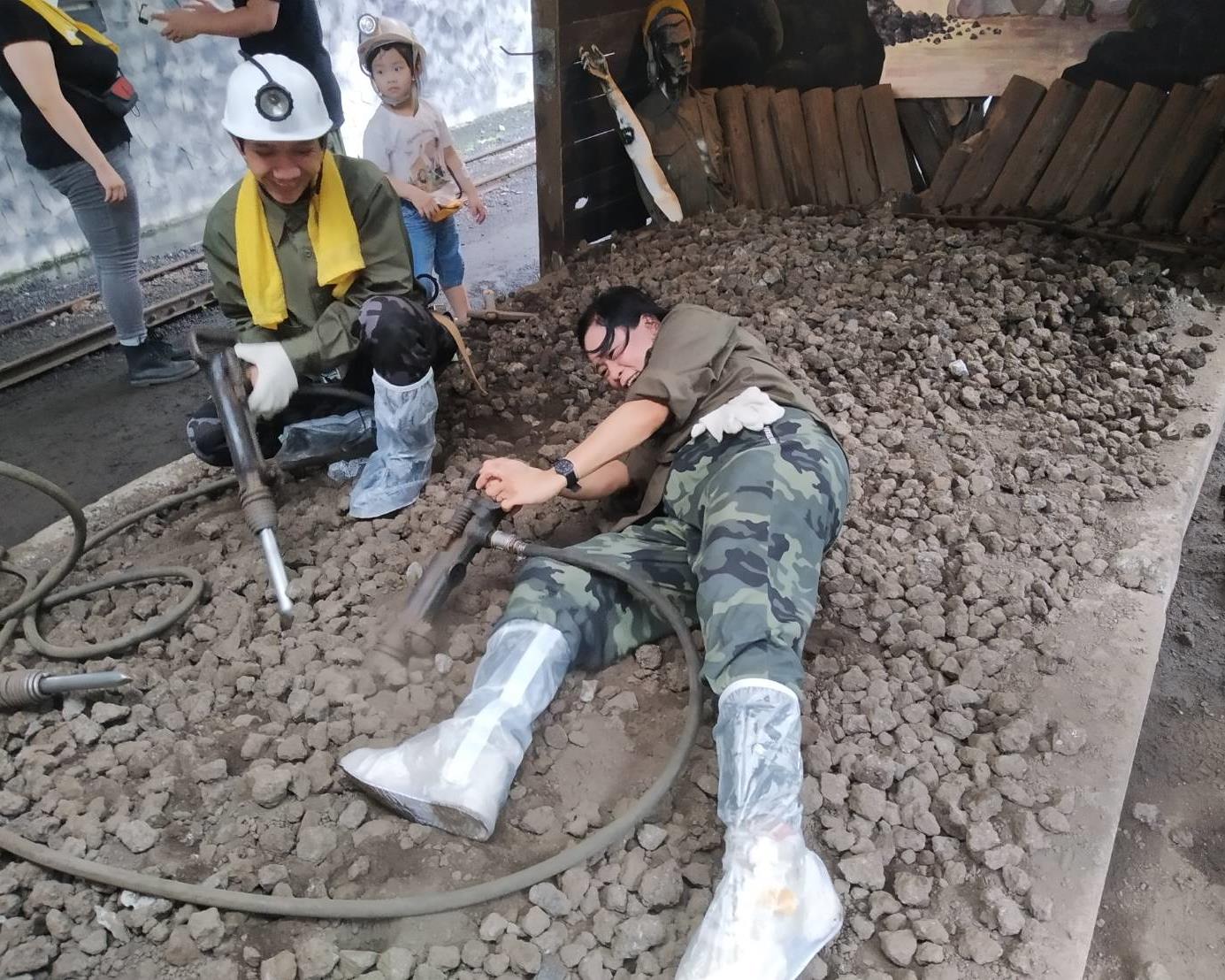 In the process of Taiwan's economic development, there were groups of heroes who were hard-working silently in the dark mining caves. Houtong was the first coal mining area in Taiwan. However, with the massive replacement of coal with petroleum fuels and a series of mining accidents, Taiwan's mining industry gradually declined and ended. The establishment of Houtong Miner's Culture and History Association is to keep the Black Gold Years and escape them faded into the waves of history.

What do you first think in mind when talking about Houtong in Taiwan's Northeast Corner? Most people might first think of the "Cat Village" now. In fact, during the late Qing Dynasty, the area was rarely inhabited but groups of mountain monkeys, so it was named "Monkey Cave Village". During the Japanese Colonial Rule Period, because of the abundance of coal in the area and the mining caves do not allow water inside, so the name was changed to "Monkey Cave (Houtong)" in 1920.
Houtong was indeed the largest and best quality coal mining area in Taiwan. At its peak, it produced half of Taiwan's coal and employed 1,500 miners. However, after the mining industry ceased production in 1990, the population of Houtong is now less than 1,000. The daily life of the miners in that period gradually faded into the waves of history.

4 Old Miners Personally Pay for The Preservation of The Miners Culture
4 local old miners, Mr. Zhou Chao-nan, Ho Bing-rong, Ke Mao-lin, and Chen Qing-xiang, who are passionate about the history and culture of the coal mines. They are unwilling to let the Black Gold Miner Years to which they dedicated their most glorious youth die out. So led by Zhou Chao-nan, they called on more than 10 local old miners to contribute their Old-Age Pension of NT$3,500 per month to rent the long-abandoned electricity charging and locker rooms next to Ruisan Mine of Ruisan Mining Company without external assistance. "Houtong Miner's Culture and History Museum" was established on 12th March 2019. Mr. Zhou said: "Houtong's history is not only about cats, the stories of the miners must go on forever!"

Mr. Lin Zheng-fu said he decided to become the Chairman of Houtong Miner's Culture and History Association because of the call from Mr. Zhou. "We were all brothers who had taken off our pants together (The temperature in the mining caves often exceeded 40°C, and the miners often worked without pants), so we have the Revolutionary Friendship and must help each other." Therefore, all of the old miners looked up their mining tools, clothing, information, old photos, etc. from their homes and donated them to the Association to in rich of the Museum's exhibition.

Three generations of Mr. Zhou's family are miners. He worked in the mining cave at 14 and was a miner for 32 years. Mr. Zhou worked as a supervisor, ambulance team member, and mining cave safety supervisor. In his early years, whenever the mining company cleaned up or when a mining company closed up, he would retrieve his signature card and other documents as memories from the garbage heap in the valley or by the river. After that, as long as the objects related to miners, he would bring them home and collect them. When he was in the army, a batchmate gave him a fool's camera, which he used to record many photos of the mining caves. These collections and graphics later became precious exhibits in Houtong Miner's Culture and History Museum.

Mr. Lin said the process of establishing the Association relies on everyone's unconditional help with zero earnings. They are not just volunteers. Many of them even donate money and materials on their own! "We are 70 to 80 years old man. To be true, we won't have too many days can talk and say (for the mining history). This is not a place to make money. We only want more people to know that there have a group of miners who used their blood, sweat, and life to take off Taiwan's economy." Mr. Lin changed his tone and emotionally said, "Here is also a rent place. Once the rent lease expires, we don't know whether the Museum can continue. We only hope to wake up the attention of the government."

The Black Gold Years Guide Tour with More Than 10,000 Visitors A Year
The most popular guide tour is "Miner's Life Memory Tour", which averages more than 10 groups a month. The tour mainly introduces the daily life of the miners, including visits to various mining sites, such as the coal processing plant, the coal bridge, the power plant, the ironworks, the medical office, and the miner's lodging. The tour takes about 2 to 2.5 hours and ends with a free vegetarian lunch box at the Miner's Culture and History Museum.

There also has a very unique "A Day as a Miner Experience" activity, which allows visitors to dress up in miners' uniforms, hats, and headlamps, then get on a truck to enter a small section of the mining cave to simulate digging mines. In the semi-outdoor space on the second floor of the Museum, there is also a "Sky Simulation Mining Cave" self-created by all of the old miners.
Those tours and activities are all free so far! "Because all of us want the populaces visit to understand the daily life of the old miners and listen to our voices. We are also afraid once the activities start to pay would influence people's willingness to visit, so we insist on free tours and activities."

"The Museum has no income at present, we rely mainly on the subsidies from the Ministry of Labor and the donations from the volunteers, visiting groups, and tourists" Mr. Lin revealed. He added that with the subsidies of the Ministry of Labor, which not only has supported the expenses of utilities but also hired 4 full-time docents and 1 manager since 2021 by the Multi-Employment Program (MEPP), allowing some old miners pass a hard time of the COVID-19 epidemic; By 2022, the number of full-time docents expands into 5.

The Association's Project Manager, Ms. Wen Xiao-ying, stated since 2020, the Association began a trail of resident docents. In 2021, with the support of MEPP, the Museum has more manpower available to provide the tours and activities with full-time docents and volunteers. Therefore, even though the COVID-19 epidemic has affected the Museum, the number of visitors has increased rather than decreased and has officially exceeded 10,000 visitors. Which preserves and promotes the culture of the miners in the Houtong area.

Getting Prepared for Operation Conditions and Toward to Self-Operating
Mr. Lin indicated that although the Association provides free Tours and Activities so far. Since the Association has published two books "60 years as a miner" and "Way back to memoirs of Houtong coal miners" in the recent two years, they went to other markets to sell the books and some visitors proactively ask to donate money after visiting. With the subsidies from the Ministry of Labor, so the Association operates smoothly at present. "We especially appreciate Tzu Chi Foundation for the sponsorship. The vegetarian lunch boxes after the Tour are sponsored by Tzu Chi to promote vegetarianism, which also alleviated a lot of the Association's burdens."

Houtong Miner's Culture and History Museum is a very young organization. Although it hasn't established a business model yet, all the conditions are well prepared. In particular, the Association is the only organization that provides the Mining Cave Experience activity. It preserves the complete culture of the miners, riches artifacts exhibition, and has first-hand retired miners as docents. Moreover, it has a team of highly committed members and volunteer partners.

Although the Association is still in the free promotion stage, with the accumulating popularity and if it can combine with the variety of local specialty industries as a completed tourism ecosystem, it would try its first business step toward to self-operating. In this way, not only the local tourism industry will boost, but also more local job opportunities will create.
Houtong Miner's Culture and History Association Facebook Page

We only want more people to know that there have a group of miners who used their blood, sweat, and life to take off Taiwan's economy.
~ Mr. Lin Zheng-fu, the Chairman of Houtong Miner's Culture and History Association 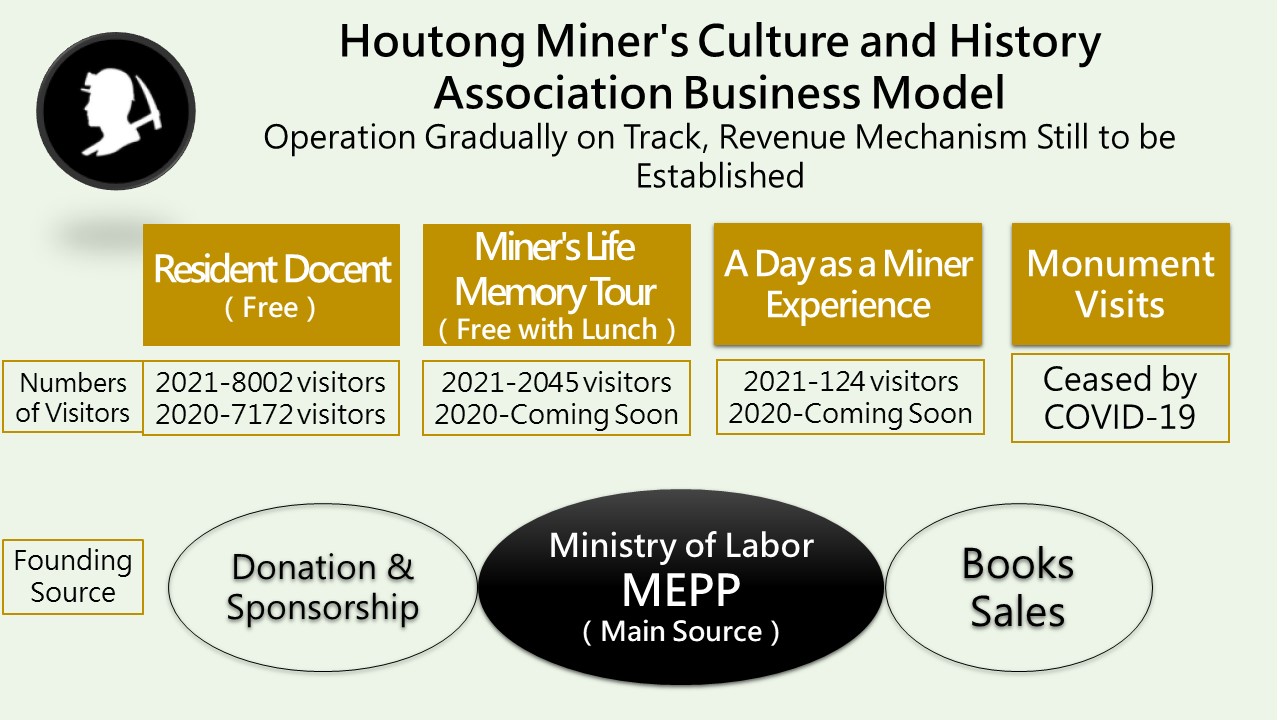 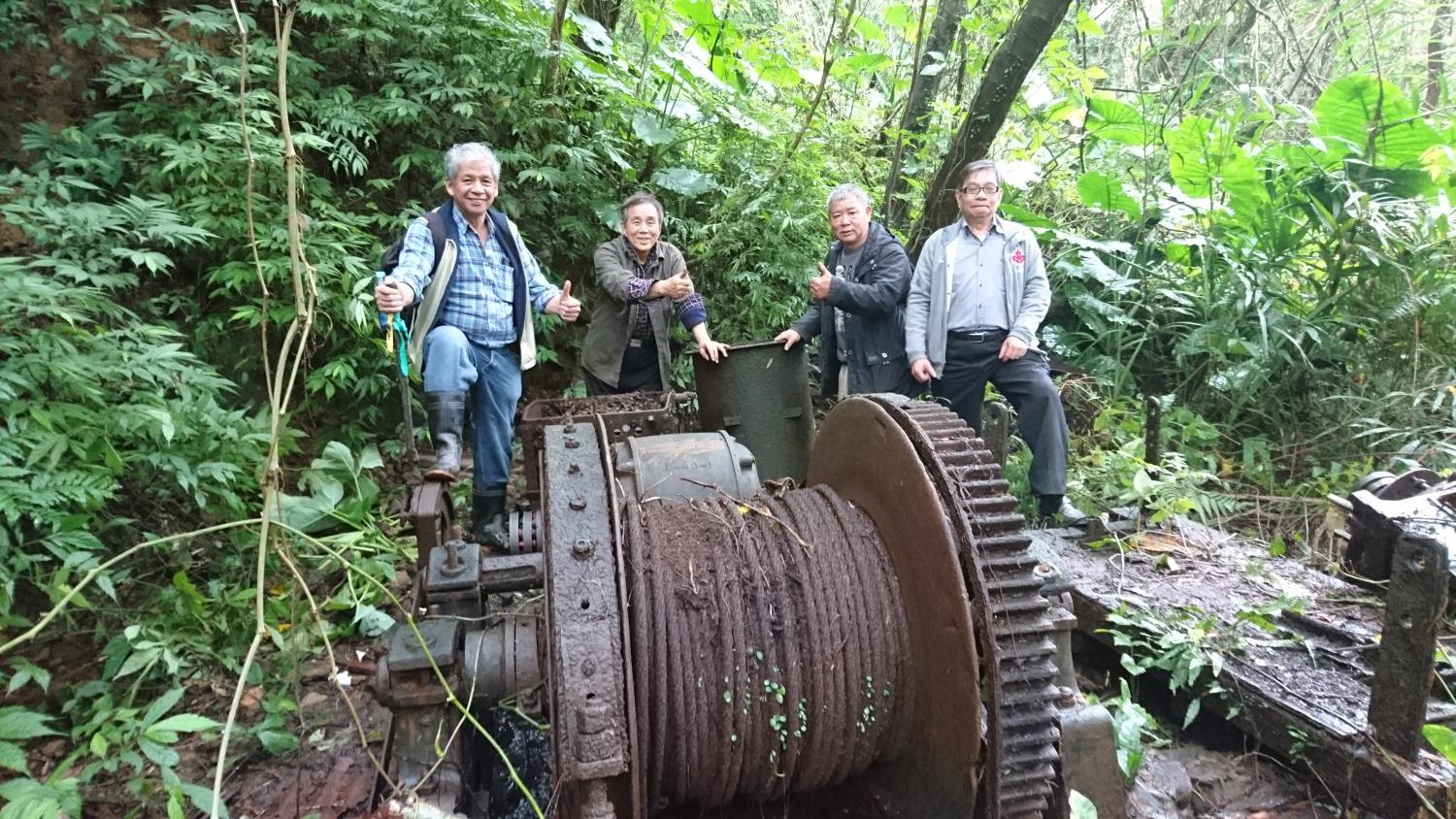 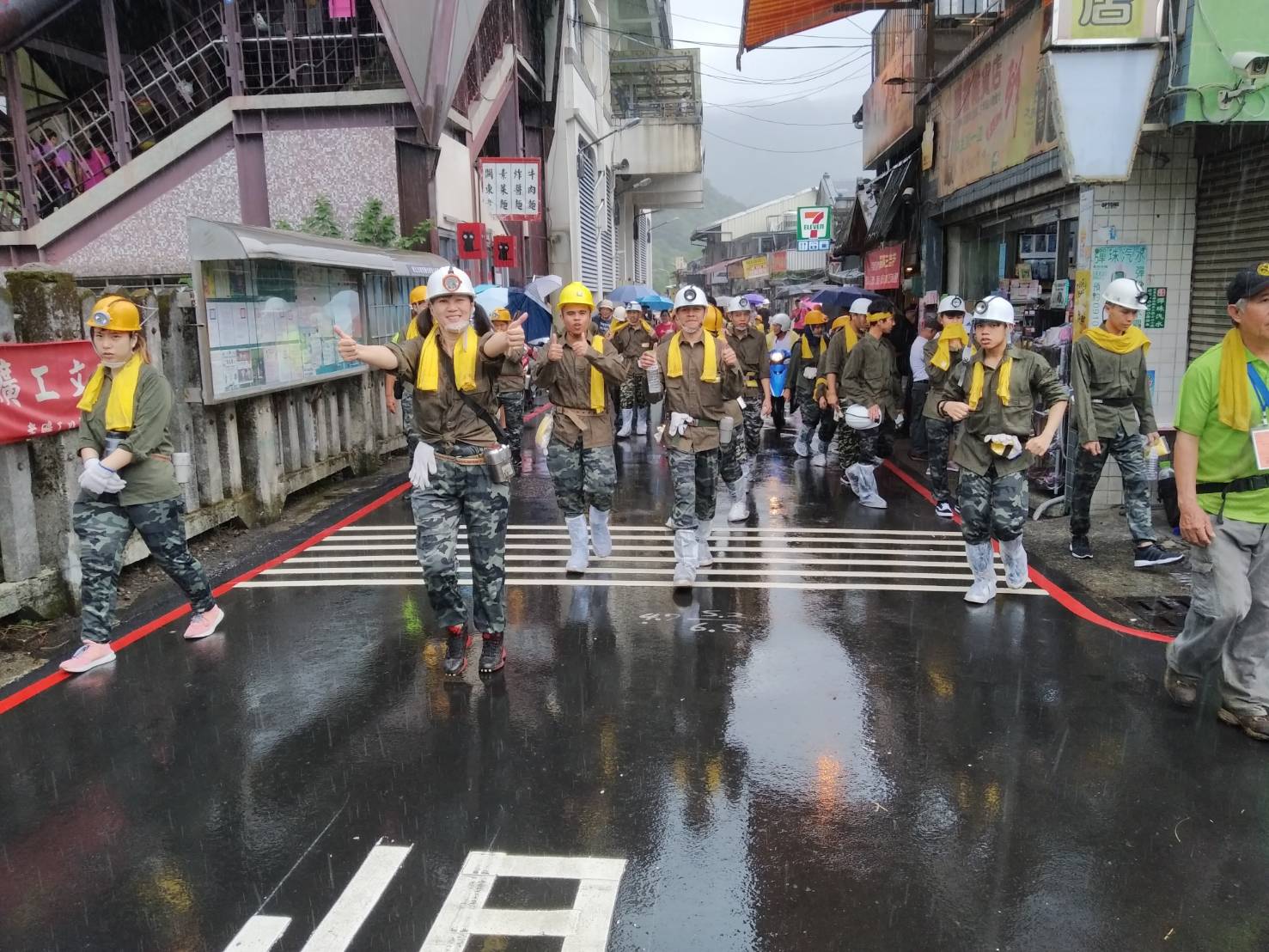 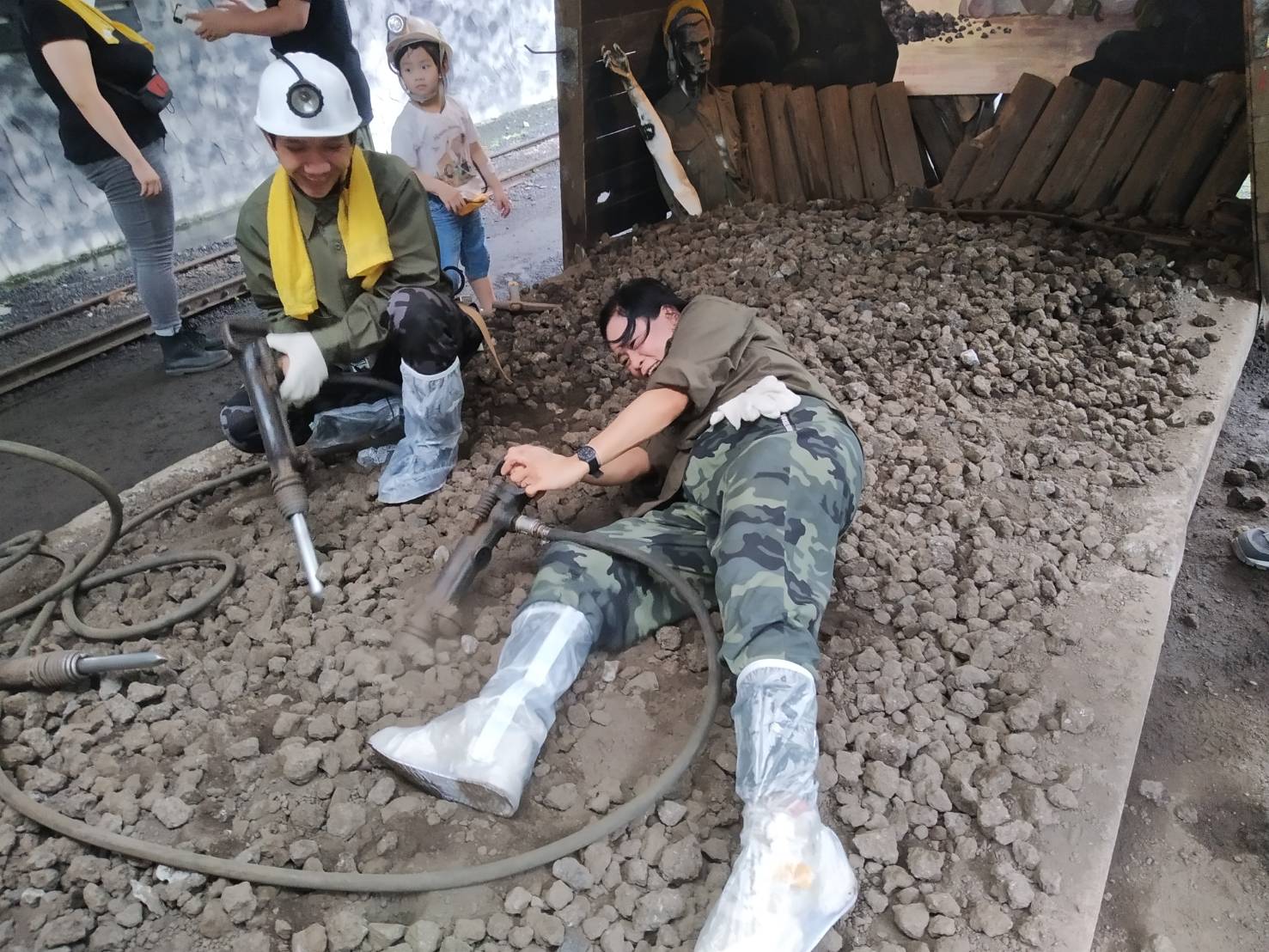 ▲The visitors excited to participate in the " A Day as a Miner Experience" activity. 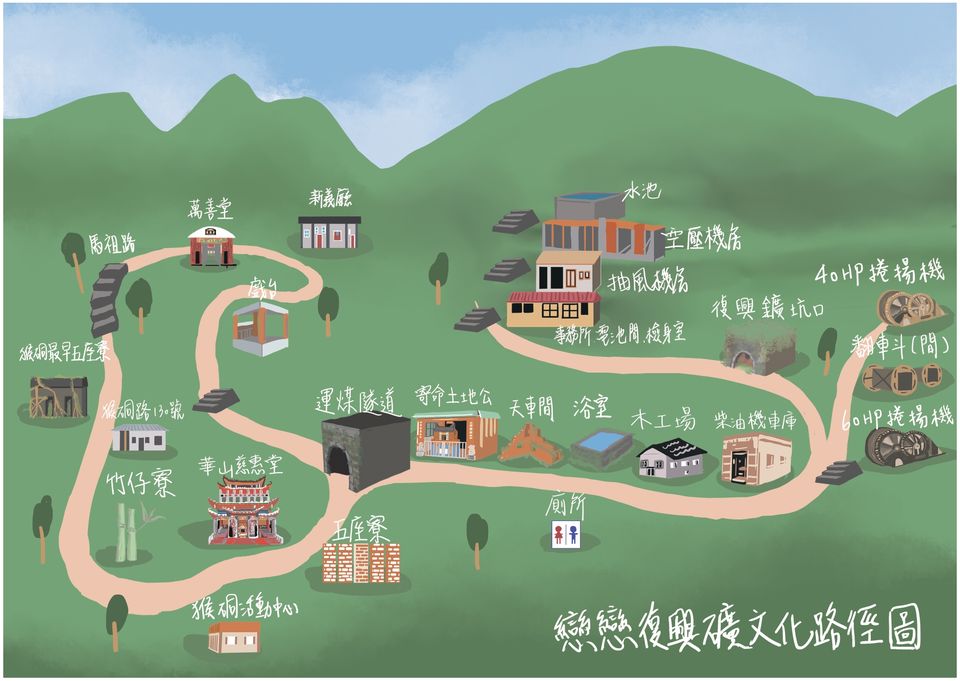 ▲The Fu-xing Mine is the most complete mining site with the largest number of ruins. (Photos provide: Houtong Miner's Culture and History Association)