Home/Article/A Base for Indigenous Organic Farming 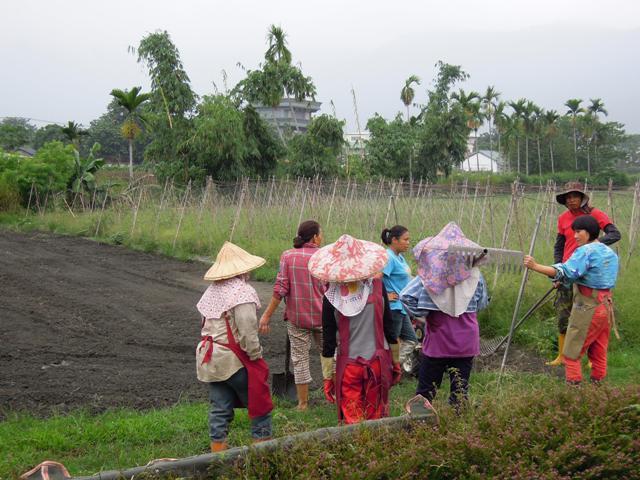 A Base for Indigenous Organic Farming

On Pangcah Organic Farm, Su Hsiu-lian is teaching farmers how to plant seedlings. Here, more than ten single mothers and middle-aged unemployed workers are learning organic farming. In the future, they will become the promoters of organic farming, promoting organic agriculture in indigenous areas.

Su thinks herself a farming person and she started learning organic farming in 2002. She was working on an organic farm. However, she disliked office politics and decided to move to Guangfu Township by herself. She explained the concept of organic farming to tribal elders. She gained their trust, and they rented a section of land to her. She then established Pangcah Organic Farm in 2007. This field was new to her. She carefully filled in her work log everyday and studied further at the Indigenous Peoples Community University.

One day, an unemployed single mother came to the farm, asking whether Su could offer her a job. Su gave her a position, and later on, the farm began to hire several more single mothers. Su made Ke Chunji’s acquaintance when she came to Guangfu Township. To attract more people to take part in organic farming and promote it to every corner of the tribe, the two founded the Indigenous Persons Sustainable Agriculture Society in March, 2011.

She began training employees from the program, teaching relevant skills from seedling cultivation to harvesting. Su hoped they could use this opportunity to learn new skills. If Pangcah disappears in the future or they no longer work in the Society, they can still manage to make a living by themselves.

The farm equipment was making a loud noise. It seemed to have got stuck on a rock. Su patiently taught her partners from the employment program how to operate the machine. Soon, the machine worked smoothly again.

Talking about the difficulties she encountered, Su said “people” are always the biggest issue. “Typhoons are not the biggest problem. When a typhoon is gone, you can grow your crops immediately. But you need to handle people issues slowly and carefully.” In the beginning, the elders doubted her. She was frustrated, asking herself why she had to work so hard. However, to set an example and to encourage her colleagues, she told herself to be confident and patient about the transition. When she saw her staff looking exhausted from the heavy workload, she and Ke would boost morale with humorous and inspiring speeches, trying to lead them to see the value of their hard work.

Organic farming is painstaking work both mentally and physically. For staff from the employment program, it was just a job. The government paid them, so they didn’t need to work so hard. To encourage them, the Society began to introduce courses on teamwork and spiritual growth in addition to organic farming training. It also designed an assessment system to reward colleagues for good performance. Meanwhile, the Society divided people into groups, giving team leaders authority to lead and manage their teams.

At the same time, to reduce distrust, Su forbade rumors in the Society. She demanded that issues be raised publically in order to avoid any misunderstandings.

For those coming from the employment program, their task was to promote organic farming to other tribal areas through the training received at the Society. In the beginning, the results were not very satisfying, but they started to see some effect after the second year. The Farm offered courses on organic farming at first, and they were widely acclaimed by the “new immigrants” who had moved to Guangfu. The reason they came to the Society was because？they wanted to grow “safe” foods, and they even invited people in the community to sign up for the courses. In fact it was the indigenous people themselves who were not confident about organic farming, believing that the project was doomed to fail. Even if it did succeed, they would question whether the Society had faked the results.

With the growth of the crops, they became less suspicious. Tribal members began to wonder why vegetables could grow without pesticides or chemical fertilizers. Su laughed and said some old people would pass by when seeing businesswomen buying vegetables at the farm after work. It was Su’s idea to arouse people’s curiosity. When the elders began to feel curious, they even asked her how she did it. In addition, their training also began to have positive results. Pangcah was the only place growing vegetables in Guangfu. They seemed to lead a traditional tribal life, which caught many people’s attention.

To Su, she still needed to strengthen management to get the job done properly. To assist staff from the employment program, the Society stipulated relevant regulations by referring to the management system of an enterprise. To change the attitude of her employees, Su attached great importance to following rules. Staff needed to punch their card when coming on and off duty, and they could not smoke on the farm. Only people who were willing to cooperate in this could report for work. Work hours were adjusted according to the farming calendar. In summer, people worked from 5 am to 9 am in the morning, 2 pm to 6 pm in the afternoon. In winter, they worked from 6 am to 10 am in the morning. They skipped the hot hours in a day. Su laughed and said that sometimes the employment center might call them in the morning, but everyone had already got off work.

Su hopes to promote organic agriculture to the whole tribe. Now there are seven local farmers willing to do organic farming on a total of 11 hectares. Their next goal is to obtain certification. To better assist farmers convert to organic farming, the Society will serve as a platform for sales and marketing. Staff from the employment program will become seeded teachers, assisting in the solving of technical issues.

Pangcah Organic Farm as a training base of organic farming will only become smaller in the future while the scale of the Society will get larger. “Then, we will be able to help more small farmers,” Su says.

Creating Sustainable Job Opportunities
Su believes that it is important to give young people local job opportunities. If they return to the tribe, knowing that they can do organic farming and learn about it on the farm and that the Society may help in marketing the produce, they will not want to sell the land and fritter the money away after the elderly residents pass away. If the youngsters lose the land, their children will end up destitute and homeless. “So long as we own the land, our people will live on it.” The Society, therefore, bears the responsibility of training people, marketing produce and ensuring cultural inheritance.

Its major sales channels include direct procurement, group purchase, home delivery and stalls at small farmers’ market. To strengthen the effect of local marketing and to develop local customers, the Society set up a stall selling fresh organic fruit and vegetables at the evening market in Guangfu in September 2013. Staff members of the Society take turns learning how to serve the customers.

The major customers at the evening market are businesswomen. To be eco-friendly and reduce unnecessary waste, they do not pack their produce. In addition, customers need to carry their own bags. However, sales are not the purpose. They are doing social marketing. Su wants other farmers to see the marketability of this business and provide affordable organic vegetables for everyone.

As for operational costs, income and expenditure have not reached a balance due to the extra cost of the workforce from the employment program. By the time the program ends in three years time, she hopes the Society can be self-sustaining by focusing on innovation, enhancing efficiency and streamlining the workforce.

Giving New Life to the Culture of Wild Vegetables
“It won’t be easy for you to harvest later. You’re supposed to think about the future when you sow.” Su is teaching the workers from the employment program how to sow, measuring the distance and calculating the number of seeds.

Planning ahead is her habit, which is why she feels obligated to revive and pass down the traditional culture of wild vegetables. When she applied for projects in the public sector, people often asked her to be more pragmatic. Some government officials even thought culture was not rooted in reality. However, to Su, culture is an extension of everyday life, and agriculture is part of indigenous life. People used to sing when farming, dance when resting. Then, they developed pottery and weaving.

As can be seen from its title, the Indigenous Persons Sustainable Agriculture Society is an organization that targets the development of sustainable agriculture. In addition to promoting organic farming, Su also pays attention to unique elements of indigenous agriculture: edible wild plants. She searches for seeds and tries to grow them on the farm. She also writes down their stories and how to grow and cook them. She develops creative dishes for edible wild plants, gives new life to tradition, and passes down the precious culture of edible wild plants.

The results of global warming urge the international community to value the protection of native species. In addition to growing wild vegetables, the farm is also going to try cultivating？foxtail millet. The next move is to enter schools, providing healthy food for students. When parents pay for their kids, they can truly decide what their children eat.

From Diversity to Social Enterprise
One learns to grow, and growing means overcoming difficulties. When Su joined the Multi-Employment Promotion Program, she spent much time attending difficult courses. Many detailed requests from this program were simply overwhelming, and piles of documents often kept her hands tied. In the second year, when everything was on track, she found herself more comfortable with the program.

Su was grateful for the investment in personnel training offered by the employment program. She had no income and paid for her own traveling expenses when she went for further studies. With the support of the program, her partners could concentrate on learning.

Changes in these partners become an important force that keeps Su moving forward. Some of them grow vegetables after work, and some even changed their resume from “I work in the fields” to “I work on an organic farm.” There was even a customer who chose to join the Society when she left her original job.

To develop a social enterprise, Su believes that she should be fully prepared, especially to deal with “people.” Her experience over the past few years has allowed her to find a way to help indigenous people. In addition to translating difficult and professional jargon into simple and plain words, actual practice is vital.

“You know if it’ll be successful when you’ve actually done it.” Su is still working towards her vision.