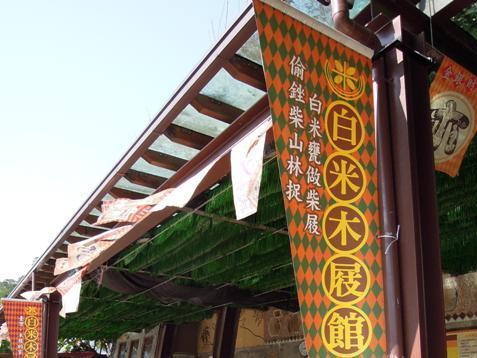 The Baimi Community Development Association is engaged in community building through the development of its traditional clog industry. Thanks to the guidance of the Baimi Clog Museum and the promotion of clog culture and products, a Baimi Business District has gradually come into being. The organization is now self-sustaining through ticket and product sales as well as the offering of hands-on activities. The Association hopes young people can become more involved in community enterprises in the future. With better services, Baimi Community is expected to become a living museum, a good place for people to raise their families.

Looking For a Way out for the Community

During the Japanese colonial period, Baimi Community was a small industrial zone centered on the cement industry. After Retrocession, it began to develop its ore processing industry. The community transformed from an agricultural to an industrial society. However, mining activity caused air and environmental pollution. In the 1980s, Baimi Community had the most serious dust problem in Taiwan.

After the Ministry of the Interior converted the organization of communities into that of civil groups, the Baimi Community Development？Association was established. Due to the poor environmental quality and the problem of outward migration in Baimi Community, the Association decided to focus on environmental issues in its initial operations, hoping to arouse people’s awareness of their home. However, the results were not as expected. People were not eager to become involved. The Association turned to economic and political aspects instead and decided to begin with basic community services.

The community-building project promoted by the Council of Cultural Affairs was in fact the turning point for Baimi Community. When examining possible resources in the community, the Association discovered the traditional clog culture. From 1993 to 1998, Association members worked very hard considering their options and finally they decided to focus on clogs in the development of a cultural industry.

Community building was conducted by the Association from the bottom up. In addition to environmental and cultural issues, the Society also placed emphasis on the empowerment of local people and the development of talents. Director of the Baimi Community Development Association, Lin Rui-mu, stated that the purpose of developing a clog culture was not to boost the economy but to bring people together to improve the environment. They managed to revive the community by R&D, manufacturing and marketing.

The clog industry was dormant for 20 to 30 years. To encourage people’s involvement in community enterprise and to rebuild the industry, after receiving three years of assistance from the Small and Medium Enterprise Administration, the Association decided to learn from community building experience in Taiwan and Japan, establishing a cooperative as an industry foundation.

However, many difficulties were faced along the way. In the beginning, people had different understandings of the task at hand and it was hard to reach a consensus. Lin said it was a real challenge in asking the residents to make a decision for the future of the community together.

However, Baimi Community still managed to establish the first “guaranteed responsibility”community cooperative in Yilan. People joining it only wished to achieve a non-profit organization and as a result the resulting cooperative focused on “people” rather than economic profit.

Recruiting was another challenge. In the process of developing the clog industry, from technical aspects to management and operation, people of different specialties were much needed. The Association had to look for people sharing the same ideals and develop their talents accordingly.

Lin said Master Chen Hsin-hsiung was the talent that impressed him most. They tried very hard to look for craftsmen skilled in the art of clog making. There were only two, and Chen was one of them. Chen worked as an apprentice at age 14 and became a qualified shoemaker at 17.

However, he worked for less than 10 years, after which the clog industry began to decline. He then worked in different fields, such as timber processing. When he was found by the Association, he was a building security guard. Chen began to receive visitors by day and worked as a guard by night. Lin asked him if he wanted to resign and focus on passing down the clog making tradition. Chen agreed and he held the position of master clog maker until the day he passed away.

Successful community building needs practical experience. Lin previously worked at the Environmental Protection Bureau, Yilan, and he had no real experience serving as an？administrator-general of the Association. Running the cooperative and developing the industry were both new to him, so he could only acquire relevant knowledge by participation.

Founded in 1993, the Association was still relatively small eight years after its establishment. Thanks to the 2001 Sustainable Employment Project of the Council of Labor Affairs, the Association was expanded to 20 staff. Developing management skills became a priority.

Lin said that training was needed for the staff coming from the Multi-Employment Program, and that he needed to learn new things as well. He spent six years studying business management at the weekends at the Open Business College affiliated with the National Taipei College of Business. His practical experience became a solid foundation for his learning results.

Lin indicated that it was his studying at Open Business College that encouraged him to inject NT$20 to 30 million into the construction of the Clog Museum. To Lin, the Clog Museum was an important part of community building. However, the work did not just entail contracting out the construction. Based on the concept of space design, the Association collected everyone’s opinions and constantly adjusted the plan. The marketing purpose of the Clog Museum was not to push people to purchase clogs but to invite them to support the development of Baimi Community.

Preparing for the Future

Lin became a more mature person from the experience he gained. He now knows what is suitable for local development, and he is good at waiting for the optimal moment. Factories surrounded the community’s land and there was only one access road, Yongchun Road, into the community. Residents were hoping to build an alternative road for trucks on the public land near the river. However, construction was estimated to cost up to NT$100 million, so they had to put off the plan for the time being.

Since the Suhua Highway Improvement Project passed through near the community and the land under the highway had not been allocated, the Association then sought to build part of the alternative route based on a plan drawn up ten years ago. The purpose was to return the road to community residents.

Lin believes that the key to a successful organization is the quality of its members. He was grateful for the Multi-Employment Promotion Program, which allowed the Association to accumulate valuable experience and led it through a difficult journey. He also encourages his partners to compete in the market rather than against organizations from the same field (e.g. the Multi-Employment Project). He has thought more than 100 times about giving up, and his partners at least 30 times. To him, personal growth can be frustrating and exhausting sometimes. However, one must find their correct position in the world.

To make a successful organization, economic strength is the key. If people are seen as the real assets, they must work and grow in a stable working environment with a sound system and fair treatment. It is only by adhering to this principle that an organization can retain staff and make them feel proud of their work.

In tune with industry development cycles, the community keeps searching for the right direction and adjusting its strategies to cope with external changes. With external investment gradually decreased, the Association must face the challenge of becoming self-sustaining. In the past,？product sales contributed to most of the income of the Baimi Clog Museum. This year, they began to sell tickets, and ticket sales are expected to make up 55% of annual revenue. This way, work can be done with less manpower and with economic balance, and service quality can be more stable.

In the meantime, the Association needs to re-design market segmentation of the museum, and visitors should understand the principle of “user pays” as well. Lin is grateful that visitors are all very friendly, and most of them approve of this policy. He admits that he planned to sell tickets from five or six years ago, but was afraid to do so. The truth is, however, in comparison with other similar organizations, they have fallen behind on this. “It is vitally important to strengthen yourself when you still have the resources.”

Talking about community vision, Lin indicates that, as early as 20 years ago, the Association had already thought about making the community a living museum. This concept also complies with the local government positioning of Yilan County as one big museum. He hopes that, in the future, every person visiting the community will enjoy its casual atmosphere and every resident will enjoy working here. The community will be transformed into an ideal location to raise a family.

His affection for his hometown is something that Lin will not let go of. “Perhaps this is what it means when a job becomes a vocation. To accomplish this will be a sufficient achievement in my life.” After 20 years of hard work, Lin is planning to let the younger generation take over. Seeing senior community members dedicating to community improvement growing older, he knows that more people will be needed to take care of them in the future. The Association will invite youngsters to participate in community affairs through volunteer services, giving them a sense of belonging. Then, they will find themselves obligated to sustain this beautiful place as they grow older. When this time comes, Lin says there won’t be any need for him to worry about the future of the community. The story of the Baimi Clog Village will continue. 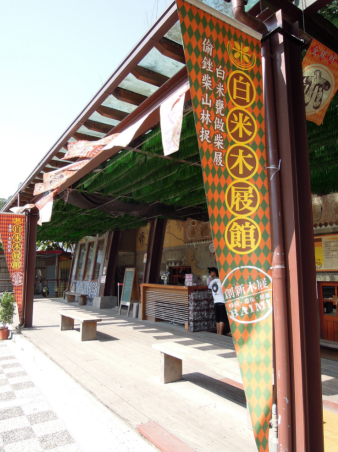 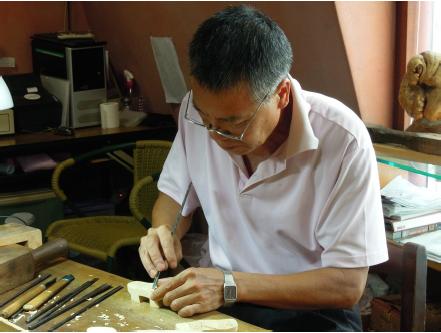 The old master puts his heart into the making of clogs; visitors choose a pattern to be carved on to the clogs.