Home/Article/Light up Their World, Glow Their Life 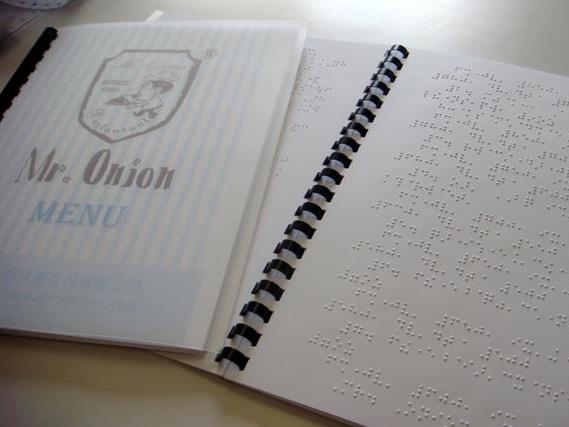 Light up Their World, Glow Their Life

In 1988, the first braille computer in English version appeared in the campus of Tamkang University (TKU), which had largely improved the learning efficiency of visually impaired students. Although the braille computer was only available in English version, it appearance helped visually impaired students, who had barriers in studying, to enhance their “English reading and learning” and make the learning a “barrier free” task.

The Braille Books Help Them to Change Their Life

In order to benefit even more visually impaired people, the Technology Development Association for the Disabled (R.O.C.) (hereinafter called as “the association”) was organized and established in 1998 with an expectation that, under the assistance of technology, it would help visually impaired people in our country to follow the steps of the world. No matter blind or weak sighted people, no matter they have needs in learning, living or working, the association can help them to find the most appropriate aids by processing a functional vision evaluation, making them independent, autonomous and being able to walk into the community with special skills.

They Cannot See the World, but They Wish To Be Seen

Upholding its original attention of supporting visually impaired people in working and learning, the association has established the “Braille Book Publishing Sheltered Workshop” in 2004. This team is the principal developer of the “computerized production technology of braille books” in the country; it also has abundant experiences, and advanced research and development skills.

In 2009, the association started to apply for joining Council of Labor Affairs’ “Multiple Employment Promotion Program (MEPP)” and established the Braille Book Publishing Service Center for Visually Impaired. It has not only helped visually impaired workers to bring their braille skills into full play, but also acquired even more abundant on-the-job trainings and activity opportunities than it had during the sheltered workshop period.

The association has put “an OEM of braille products” as its principal development direction and its products include: Producing braille books, public braille signs, braille name cards, and so on; and developing different kinds of braille products.

In terms of making braille textbooks and books, braille peripheral products and services, and creative products designed based on the visual impairment concepts, the association has steady users and purchasers; in the future, it will gradually open business opportunities in the market and continue to do its bests to be financially autonomous. Besides, in terms of assisting employees in empowering their vocational capacities, the association has simultaneously arranged internal and external educational trainings including courses for mathematical braille rules and group courses; trainings for stress adaptation and team communication; digital braille music scores workshop, braille computer workshop, and computer software application level C training class, which are courses offered by combining external resources.

In 2012, the association totally produced 306 volumes of high school textbooks for visually impaired students (statistics till Q2), which are quite useful studying tools for many visually impaired students; it also the best-selling book of 2012, which will be printed on more than 2,500 braille pages at the end of this year and then provided to visually impaired people for free; by adopting all possible ways to build a barrier-free space, it has done its bests to create a friendly environment for visually impaired people. Besides, in terms of innovation feasibility, the association has: Advocated braille menu to offer visually impaired people a friendly environment; planed and promoted “braille name cards” (also printed with sighted text) to expand the public welfare connotation of braille to the general market; developed creative braille products proactively and introduced Germany’s “Dialogue in the Dark Workshop”, a workshop that offers normal people situational experiences.

With the launch of Chinese braille computer, the association changed the world of many visually impaired people in the past. And start from the establishment of “Braille Book Publishing Sheltered Workshop”, which made the association the principal developer of “computerized production technology of braille books”, to the popularization of braille activities and the promotion of visual impairment concepts, the usage of braille is no longer limited in personal use of visually impaired people, but applied in general mass consumer market. By implementing this program, visually impaired people will be offered with professional trainings and steady employment opportunities in the future. All of these will help these people, who have a great difficulty in finding a job, to enhance their professional skills, to have a stable livelihood, and to build their confidence.