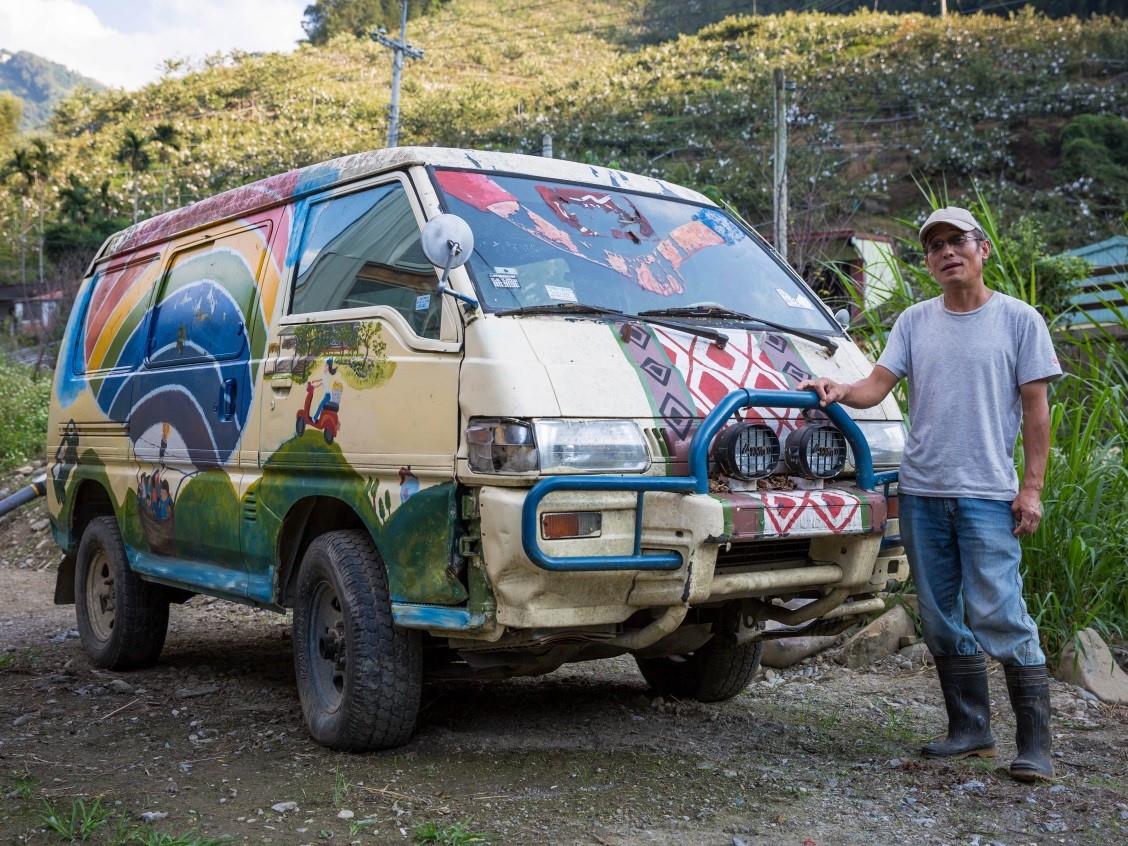 Kitchen, where is the Atayal’s spirit of supporting each other, is the core of every household. They rediscover the values of growing crops by “eating”. “Daan River Indigenous Tribal Kitchen” is always open, connecting the generations of 15 Atayal tribes.

Eighteen years have passed. When Lin Jian-Zhi looks back over the past years: After the 921 Earthquake hit Taiwan, he decided to quit a stable job in Taipei and returned to the tribe to devotion. He still remembers everything vividly.

“This is my old combat buddy for 16 years; never took a day off until smoke came out of it and it was out of work for good.” Though colorfully painted, you could easily tell that the 4-wheel-drive van was really old. It is the very first medical van in the tribe. During reconstruction after the earthquake, Mr. Lin helped out with the rescue and reconstruction, and also became the medical-care van driver due to the manpower shortage. He took seniors with acute or chronicle diseases in the tribes in Heping District, Taichung and Taian Township, Miaoli to seek medical aid.

This van is full of the memories of Ms. Lin sticking with the tribe through thick and thin. 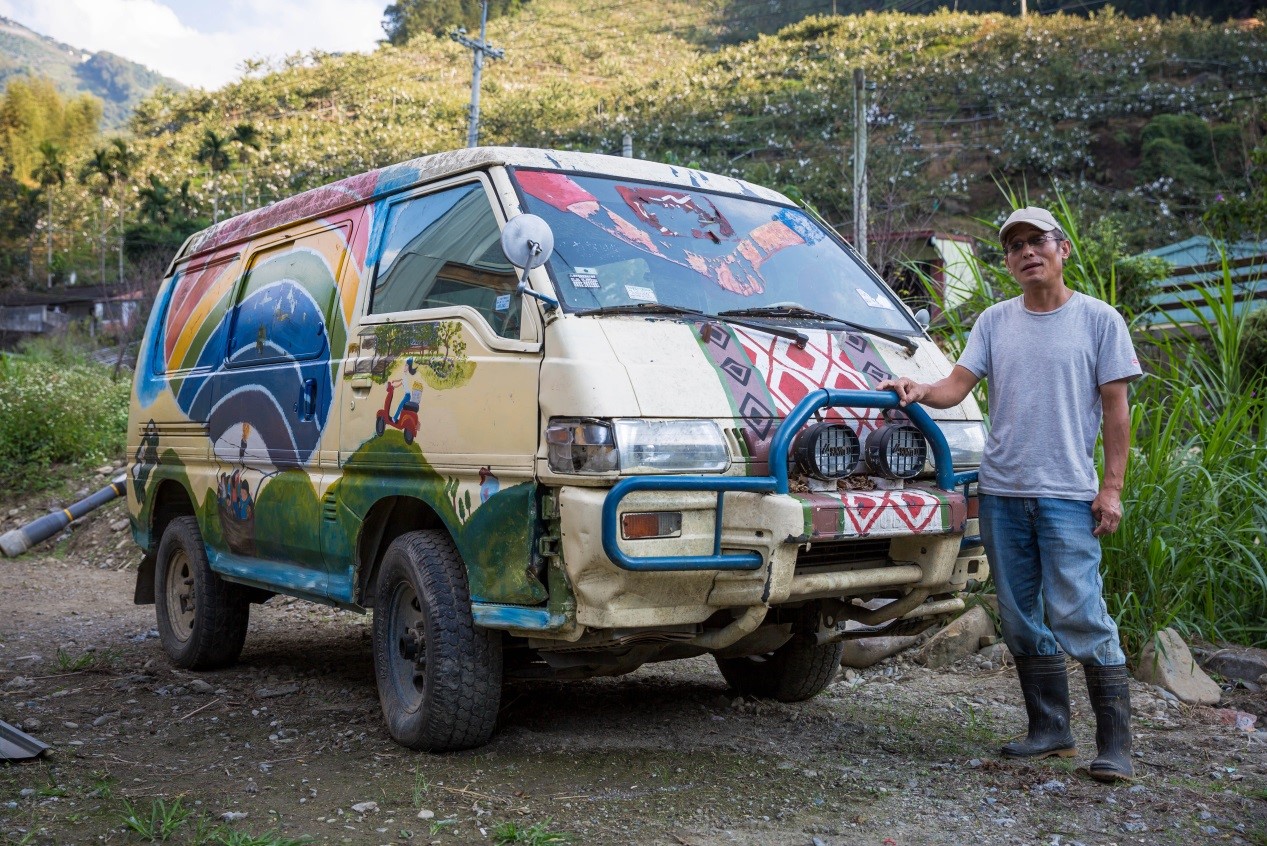 The drainage basin of Daan River was the most-affected area by the 921 Earthquake. Some of the tribes there were destroyed completely. After the earthquake, many people leaving their tribes to work in the cities returned home to help reconstruct their home from scratch.

“I would help out at first. But once I was back, I want to stay.” Ms. Lin is one of those who returned hometown after the quake. At that time, he responded to the calling of the northern social-welfare organization to help out with the reconstruction in the tribe. He knew that the reconstruction required much more time than he expected. Also, both time and manpower were critical to the reconstruction so he determined to quit his job and dived into it.

The affected area in Taichung was vast with two reconstruction centers then. Ms. Lin worked in the “Daan River Tribe Station”; his most important mission every day was to drive people in the tribe to hospitals in Taichung.

At the beginning of construction, they were able to gather enough manpower to reconstruct the hardware because of the subsidy programs of “Disaster Area Reconstruction Strategy” and “921 Earthquake work-fare-Relief-by-Work Plan” from the Ministry of Labor. Yet, the biggest challenge for people in the tribe is how to make a living after the reconstruction is complete. To have a smooth start, Ms. Lin established “Communal Tribal Kitchen” with his partners and women from the tribe.

At that time, thanks to the social welfare organization that applied for “Multi-Employment Promotion Program – Social Type” to the Ministry of Labor so that the kitchen was able to promote their services including food delivery, elderly care, and medical transportation. What they did was to calm people in the disaster area, and this action was based on the idea of “eat and work together” in Atayal tradition. Yet, when being asked: “What can we do in the future?” Everyone in the tribe had no idea.

“Let’s start growing vegetables!” In their tribe, people who can grow vegetables and raise chicken do farming; people who had a spare room in their house would renovate it and become host families; people who are familiar with the tribal environment received the tour guide training. Meanwhile, women developed traditional handmade handicrafts and foods. In addition to selling them on the street, they actively participated in different kinds of markets to accumulate their experience for marketing and sales.

Cooperation Helps the Indigenous People Grow the Business of the Kitchen

“The tribal life and the rich culture are leading us on the right path.”

For Lin, the Multi-Employment Promotion Program helped the members of the kitchen go through a difficult adaptation period. They finally became a team with a clear, common goal and each has his / her specialty. Yet, care work requires a certain amount of revenues to continue. Therefore, the kitchen team decided to start from where they have the best advantage and something closest to life in the tribe – lands. As a result, they introduced the “Adopt-A-Farmland-Plan for Citizens”.

As soon as they launched the plan, it attracted more than 300 people. NTD$500 per month is used to support agricultural development in the tribe. Seniors in the tribe or the kitchen team would grow dozens of kinds of fruits and vegetables according to seasons on the designated farmlands and deliver the harvested fruits or vegetables to the adopters twice a year.

The stable small amount of sponsorship allows the kitchen team to promote care work in the tribe as well as develop their business. They deliver group meals and prepare for pre-order bentos every morning; in the afternoon, they make crafts, produce processed food, weave, bake bread and make desserts, pack agricultural products or deliver them to customers. The versatile business connects various kinds of local business and creates good revenues.

Lots of experiments for good preparation is the key to the kitchen to operate smoothly. With a stable foundation, Mr. Lin and his partners were able to apply for “Multi-Employment Promotion Program – Economic Type” in 2004 to enlarge the kitchen.

After years of hard work, many products offered by the kitchen, start to earn a good reputation in the market. Besides various fresh vegetables and fruits, the staff of the kitchen has created quite some featured foods such as millet-marinated pork, millet sticks, moon cakes of Atayal flavors and bread, which are always in great demands around holidays or Chinese New Year.

In 2007, Taiwan Indigenous Dinavun Development Association was founded and it is the official brand name for the kitchen. Its service area covers dozens of Atayal tribes in the Daan River basin. “The relevant business developed by the staff at the kitchen supports the care work in the tribes.” As an executive secretary of the association, Mr. Lin pointed out that supporting and caring for each other is the core objective for the operation of the association.

Up till now, there are currently 8 social workers and 13 kitchen staff working in the association. They care for people in the tribes, adopt farmlands, do administrative work and run a business (the kitchen, processed products, baking, handmade crafts, and in-depth tours). All these jobs are according to the complete division of labor and all work well together.

After the disaster, the entire tribe depends on agriculture for livelihoods. It proves how precious and important lands are. In 2010, the association applied for the Empowerment Employment Program promoted by the Ministry of Labor. They developed “eco-friendly agriculture” and convinced farmers in the tribe to replace conventional farming (using chemical fertilizers and chemicals) with organic farming such as liquid fertilizers and Probiotics. Meanwhile, farmers are encouraged to grow suitable vegetables and fruits.

In this way, they not only increase the diversity of vegetables and fruits but also help citizens start an organic farm. Now, adopters feel like receiving gifts when they get the delivery box because they never know what kind of organic vegetables and fruits are in the box. Furthermore, the organic agricultural products from the kitchen make a hit on the vegetable marketing website for their reasonable prices.

“Farming is the manifestation of the traditional lifestyle in the tribe and not for business purpose.” During the nine-year-period of Multi-Employment Promotion Program and Empowerment Employment Program, the kitchen has expanded its role, not only providing food to people in the tribes but also supplying service for children care, elderly care and business development.

He believes all credited to his people’s strong faith and persistence for Atayal traditional culture.

Pass Atayal Culture down from Generation to Generation

Lands help indigenous people find the connections with the traditions while the people from the cities see our perseverance and strong vitality. 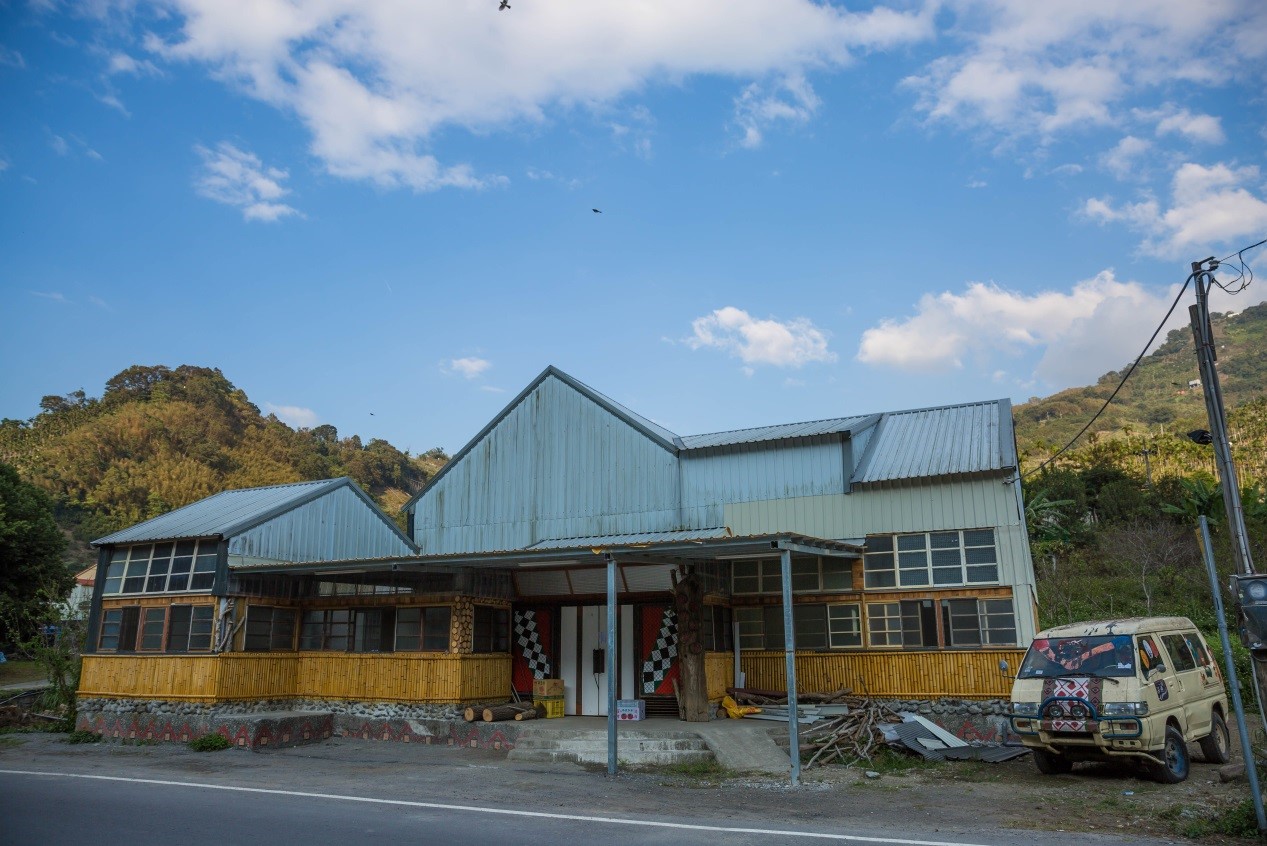 In 2015, the government discontinued its support and the kitchen headed for independent operating; in 2018, the lease for the kitchen’s old site will run out and the new kitchen is already complete not far from the old site. Now, they have their own lands, a multi-functional layout, and a complete storage facility for production. It will help everyone do their part better.

The new kitchen is equipped with a great refrigeration facility. (photographed by Yuan Ting-Yao)

“You need to be more confident in doing the right things.” Mr. Lin believes that the earthquake is an opportunity to change their fate as well as start all over again. Now, more and more young people are joining the kitchen: some deliver meals and do agricultural product management and sales; some even organize clubs to help with care services for the elders. The new driver for the medical van is only in his twenties. The team comprised of different generations is getting along well and happily.

Along the Daan River, the Gaga spirit of Atayal tribe comes back, existing in a believer’ s heart. 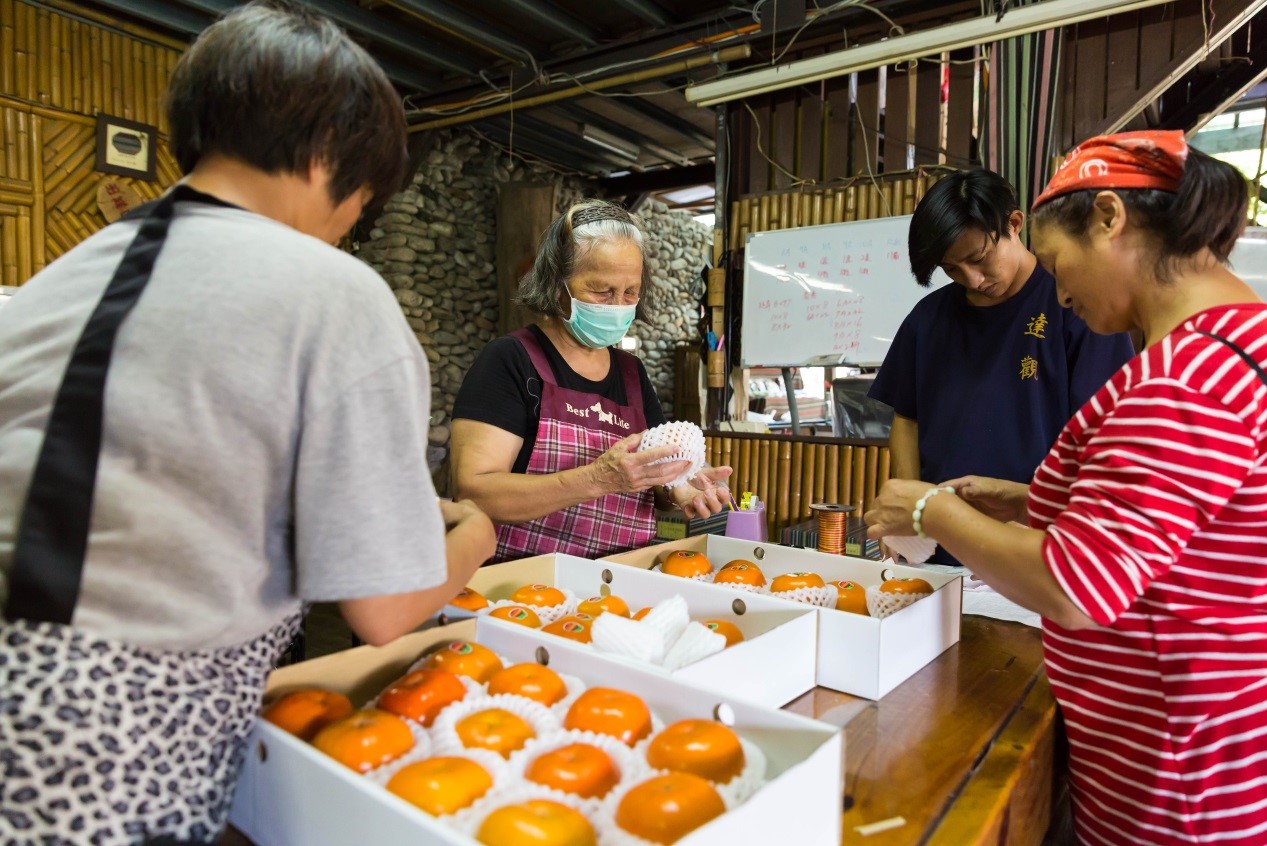 The staff of the kitchen regardless of their generations help out with the product packaging. (photographed by Yuan Ting-Yao)

It is the core of Atayal’s traditional culture. In the past, people in the tribe used to do farming, hunting, and harvesting together, sharing everything and had meals together. The old, the middle-aged and the young take care of each other. This is the “long-term care” that the aging society needs to develop urgently.